Astronaut View of Fires in Colorado 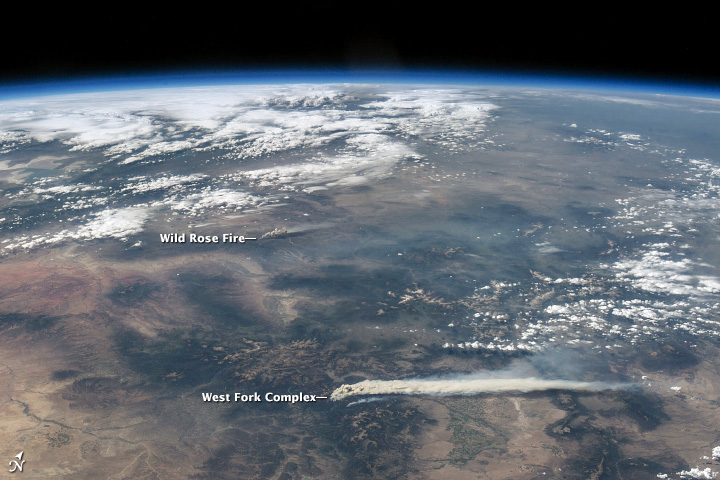 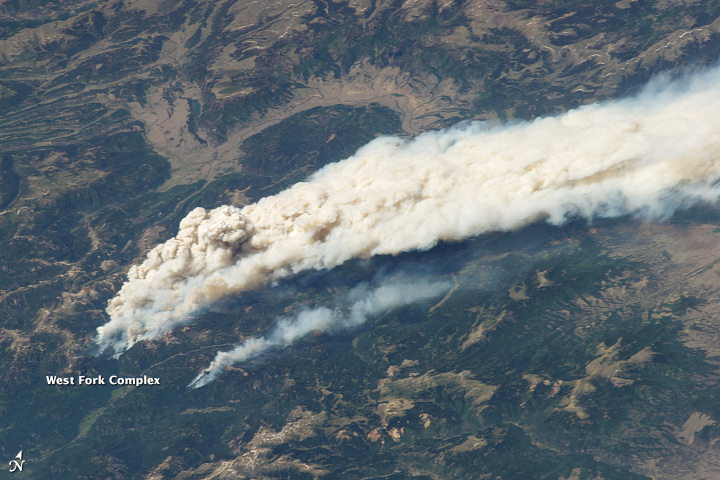 Thick smoke billows across the landscape in these digital photographs of the western United States. Both photographs were taken by astronauts aboard the International Space Station (ISS) on June 19, 2013.

The images show a plume wafting from the West Fork Complex fire, which was burning explosively in southwestern Colorado near Pagosa Springs. To the northwest, a smaller plume from the Wild Rose fire is also visible (upper image).

While the Wild Rose blaze was fully contained by June 25, 2013, the West Fork Complex was still raging through the San Juan and Rio Grande National Forests. The West Fork Complex is a combination of three fires: the West Fork fire, the Windy Pass fire, and the Papoose fire. Lightning ignited the first of the blazes on June 5, 2013, and together they had charred approximately 75,000 acres (30,000 hectares) by June 25. The fires were burning in rugged terrain with large amounts of beetle-killed spruce forests.

The West Fork Complex fire was so hot that it spawned numerous pyrocumulus clouds—tall, cauliflower-shaped clouds that billowed high above the surface. Pyrocumulus clouds are similar to cumulus clouds, but the heat that forces the air to rise comes from fire instead of sun-warmed ground.

Scientists monitor pyrocumulus clouds closely because they can inject smoke and pollutants high into the atmosphere. As those pollutants are dispersed by wind, they can affect air quality over broad areas. As noted by the University Maryland at Baltimore County (UMBC) Smog Blog, smoke from western fires contributed to elevated concentrations of particulate matter over large sections of the eastern United States.

Astronaut photographs ISS036-E-009725 (top) and ISS036-E-009608 (lower) were acquired on June 19, 2013, and are provided by the ISS Crew Earth Observations experiment and Image Science & Analysis Laboratory, Johnson Space Center. The image was taken by the Expedition 36 crew. It has been cropped and enhanced to improve contrast, and lens artifacts have been removed. The International Space Station Program supports the laboratory as part of the ISS National Lab to help astronauts take pictures of Earth that will be of the greatest value to scientists and the public, and to make those images freely available on the Internet. Additional images taken by astronauts and cosmonauts can be viewed at the NASA/JSC Gateway to Astronaut Photography of Earth. Caption by Adam Voiland.

The West Fork Complex fire was so hot that it spawned numerous pyrocumulus clouds.

A complex of fires in southwestern Colorado blazed through beetle-killed spruce forests in June 2013.