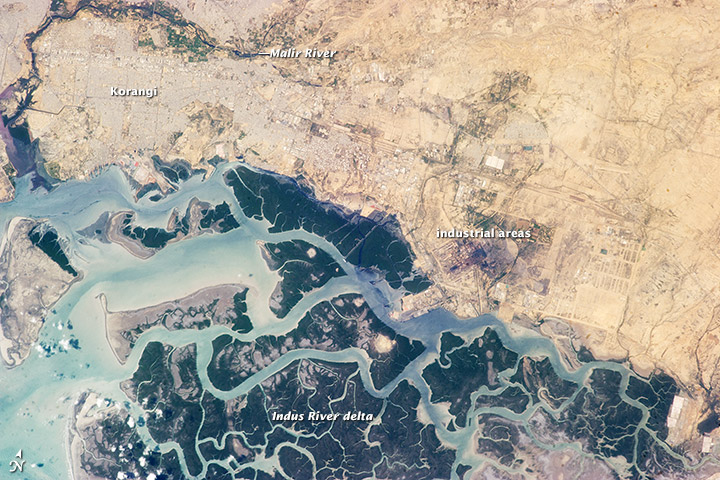 Korangi, or Korangi Town, is part of the Karachi metropolitan area of coastal Pakistan. This photograph taken by an astronaut from the International Space Station highlights the contrast between the highly urbanized and industrialized Korangi area and the dense green mangrove forests and waterways of the Indus River Delta to the south. Away from the river delta, vegetation cover disappears rapidly to the northeast.

To the north and west, Korangi Town is bordered by the Malir, one of two rivers that pass through the Karachi metropolitan area (the other is the Lyari, not shown). The river course of the Malir is marked by green riparian vegetation, which stands out vividly against the surrounding gray to tan urban areas.

One of the largest industrial areas in Pakistan is located in Korangi. Known as the Korangi Industrial Area, or KIA, this region is marked by large buildings and lots, many having white-roofed structures. A conspicuously dark region marks the location of steel works; while bare soil and built materials are present, significant vegetation cover also contributes to the dark hues. In addition to steel, the KIA also includes textile, pharmaceutical, automobile, chemical, and flour industry facilities.

Astronaut photograph ISS035-E-24919 was acquired on April 20, 2013, with a Nikon D3S digital camera using a 400 millimeter lens, and is provided by the ISS Crew Earth Observations experiment and Image Science & Analysis Laboratory, Johnson Space Center. The image was taken by the Expedition 35 crew. It has been cropped and enhanced to improve contrast, and lens artifacts have been removed. The International Space Station Program supports the laboratory as part of the ISS National Lab to help astronauts take pictures of Earth that will be of the greatest value to scientists and the public, and to make those images freely available on the Internet. Additional images taken by astronauts and cosmonauts can be viewed at the NASA/JSC Gateway to Astronaut Photography of Earth. Caption by William L. Stefanov, Jacobs/JETS at NASA-JSC.

This highly urbanized and industrialized area stands in stark contrast next to dense green mangrove forests and waterways of the Indus River Delta.