Dust Storm on the Arabian Peninsula 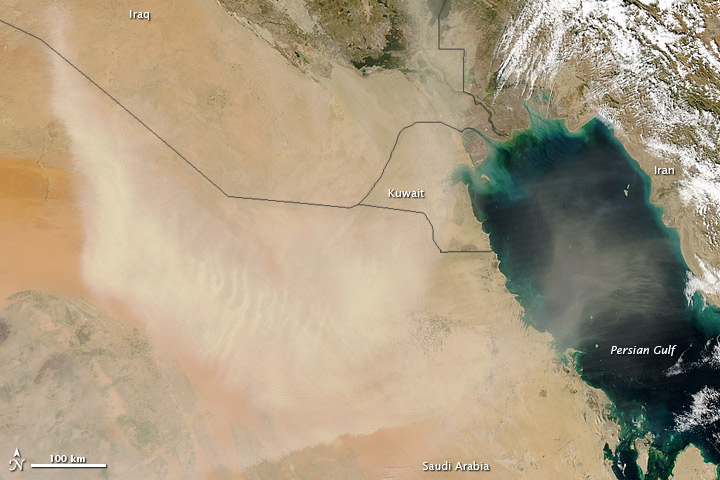 On March 24, 2013, a dust storm arose on the Arabian Peninsula, blowing through parts of Saudi Arabia, Kuwait, and Iraq. Dust also stretched across the Persian Gulf toward Iran. The Moderate Resolution Imaging Spectroradiometer (MODIS) on NASA’s Aqua satellite captured this natural-color image the same day.

Lee Grenci, a meteorologist at Penn State University, explained that the large-scale atmospheric disturbance moved from west to east across northeastern Africa and the Middle East from March 22–24, 2013. The disturbance occurred at roughly 18,000 feet (5,000 meters) in altitude. Meanwhile, increasing amounts of late-March sunshine heated the land surface and led to an overturning in the atmosphere near the ground, such that upper level winds mixed with weaker winds near the ground. Grenci likened the events to mixing oil and vinegar to make salad dressing. “Like the salad dressing, the wind profile in the lowest several thousand feet then became more homogeneous, with winds near the Earth’s surface becoming stronger and gustier, which caused the blowing sand and dust.”

Besides the atmospheric disturbance, the Arabian peninsula had another ingredient necessary for dust storms: sand. Uninhabited sandy deserts comprise most of Saudi Arabia’s land surface, and less than 2 percent of the land is arable.

An atmospheric disturbance in March 2013 picked up sand in several parts of the Middle East. 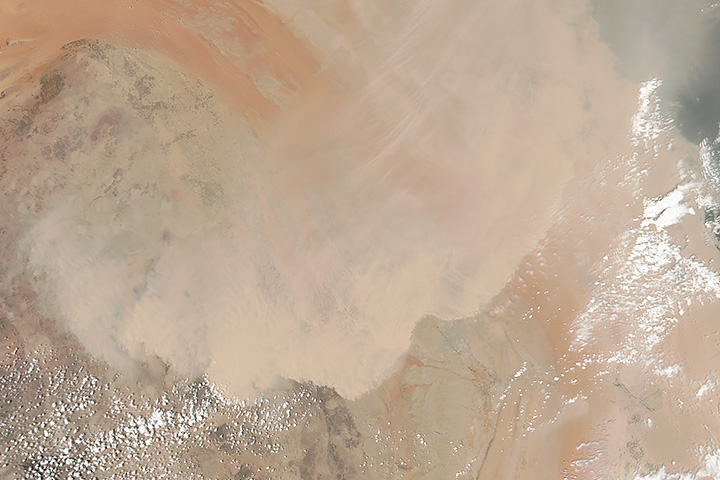 Winds pushed a wall of dust across the Arabian Peninsula in April.