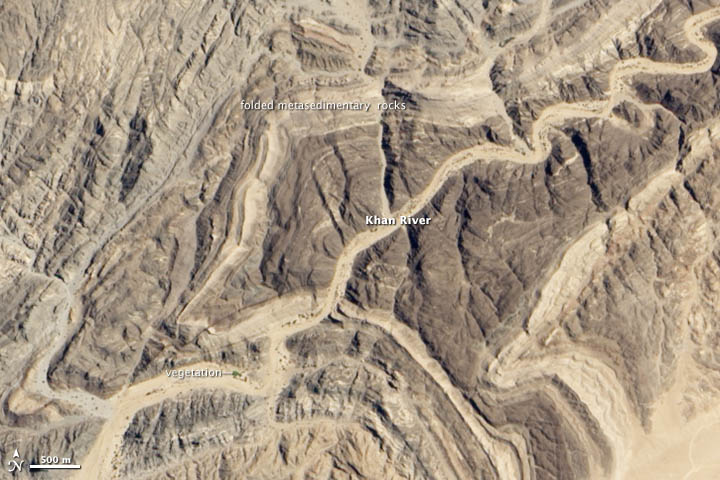 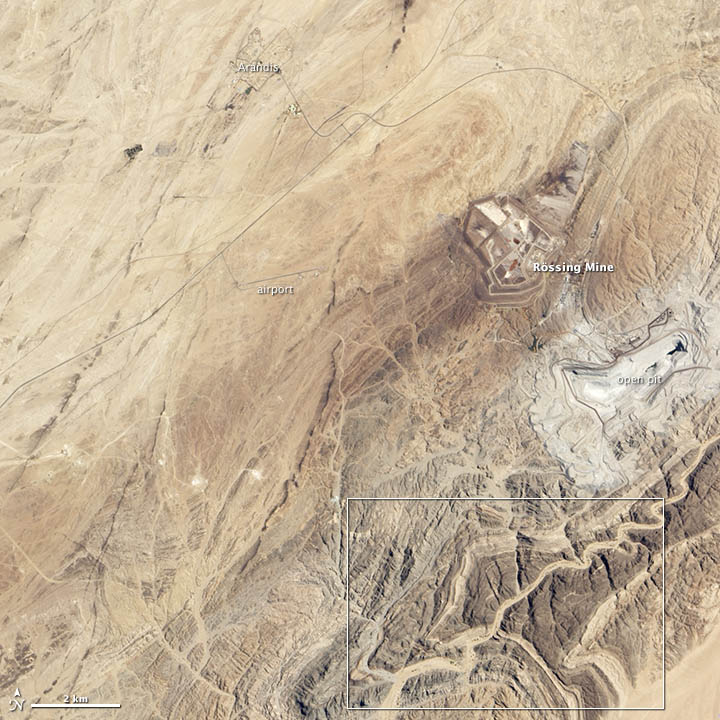 The Namib Desert in southwestern Africa is one of the most inhospitable places on the planet. It rarely rains, unless you count the fog that often blankets the coastal area. There are no lakes or ponds. There’s almost no surface water at all, save for ephemeral streams that emerge when scattered storms bring rain in the winter. Even those streams flow for just a few days or weeks each year, and they disappear into the ground or evaporate into the air long before they reach the sea.

Given the scarcity of water, it’s not surprising that Namibia has the second lowest population density in the world, trailing only Mongolia. And the Namib Desert is one of the most sparsely-populated parts of Namibia. But despite the harsh environment, there is still something that draws people deep into the desert: uranium. Namibia is among the top five uranium-exporting countries in the world.

The Erongo region is home to Rössing mine, the oldest and third-largest producer of uranium in the world. Situated about 70 kilometers (40 miles) northeast of the coastal city of Swakopmund, the mine is located near the ephemeral Khan River. The Advanced Land Imager (ALI) on NASA’s Earth Observing-1 (EO-1) satellite acquired this image of the mine and surrounding landscape on March 8, 2013.

Roessing’s 400-meter (1,300-foot) deep pit and a large processing facility north of it are the dominant features in the bottom image. The pit taps into layers of metasedimentary rock that contain intrusions of a type of coarse-grained igneous rock called pegmatite. Pegmatite often contains rare minerals and forms when magma slowly cools and hardens beneath the surface.

The mine sustains the small satellite town (population 7,600) of Arandis, which is visible near the top of the image. Roads and rail connect Arandis to Swakopmond, and there is a small airport south of Arandis. The dried channel of the Khan River is visible near the bottom of the image. While the surrounding landscape is largely devoid of vegetation, groundwater beneath the channel sustains some shrubs, trees, and grasses. The patches of green within and around the river channel in the top image are vegetation.

Some Namibians and environmental groups have raised concerns that water samples from the Khan River channel showed elevated uranium levels. Uranium carried in wastewater from the mine may be reaching groundwater and increasing uranium levels near the river. However, a study led by Michael Schubert, a scientist from the Helmholtz Center for Environmental Research, found that uranium also occurs naturally in the channel sediments. His team found no evidence that water contaminated by the mine had seeped into the groundwater.

One of the world’s largest uranium mines is located in an arid desert near Namibia’s ephemeral Khan River.