Yarlung Tsangpo: The Everest of Rivers 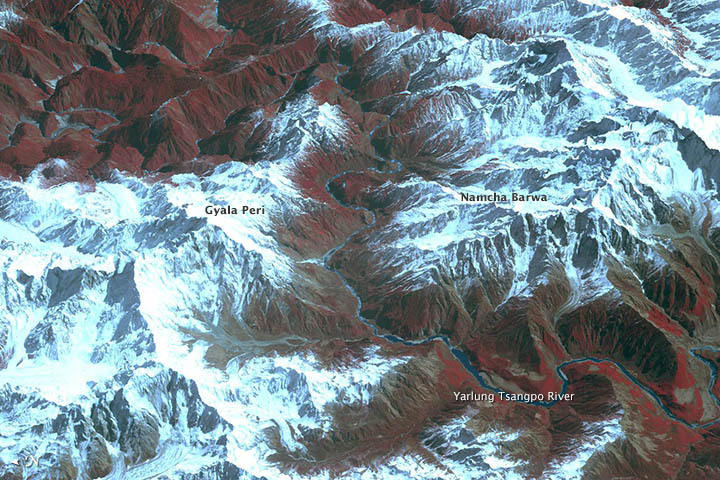 Adventurers call Tibet’s Yarlung Tsangpo the “Everest of Rivers” for good reason. Stretches of it are some of the least-explored places in the world, and tales of failed expeditions abound. With headwaters in western Tibet near Mount Kailash, the river has the highest average elevation—4,000 meters (13,000 feet)—of any major river in the world.

For much of the river’s 3,000 kilometer (1,800 mile) course, it flows east through open valleys on the Tibetan Plateau. But at the eastern end of the Himalayas in southeastern Tibet, the river bends sharply, rushes through one of most dramatic gorges in the world, and descends to the lowlands of the Ganges Delta.

The Yarlung Tsangpo gorge is defined by superlatives. Carved into granitic bedrock, it reaches more than 5,300 meters (17,000 feet) from top to bottom in some places, making it three times deeper than the Grand Canyon. It’s also one of the world’s longest canyons, stretching more than 500 kilometers (300 miles).

The image above shows one of the most inaccessible and rugged sections, a part near the canyon entrance where the river passes between two major peaks: the 7,782-meter (25,446-foot) Namcha Barwa and the 7,294-meter (23,462-foot) Gyala Peri.

The image above is a composite, draping a false-color view from February 25, 2004, over a three-dimensional model of the area. The images and stereoscopic data behind the model were acquired by the Advanced Thermal Emission and Reflection Radiometer (ASTER) on NASA’s Terra spacecraft. Vegetated areas range in color from red to pink; snow is white; water is black; and bare rock is earth-toned.

In 2002, a group of seven people led by filmmaker Scott Lindgren set out to become the first party to kayak the upper gorge. While previous attempts had ended in tragedy, Lindgren’ group prevailed after 45 harrowing days on the water. They didn’t do it alone, though. A team of 93 others accompanied them on land, carrying food and supplies.

They also had help from above. The heart of the gorge is so inaccessible that maps weren’t available when they were planning the expedition. To prepare, Lindgren’s team spent dozens of hours poring over satellite imagery of every mile of the river. “You know you’re screwed when you’re scouting from space,” one of the kayakers joked to Outside magazine.

One of the deepest and least explored canyons in the world winds between two towering peaks in southeastern Tibet.