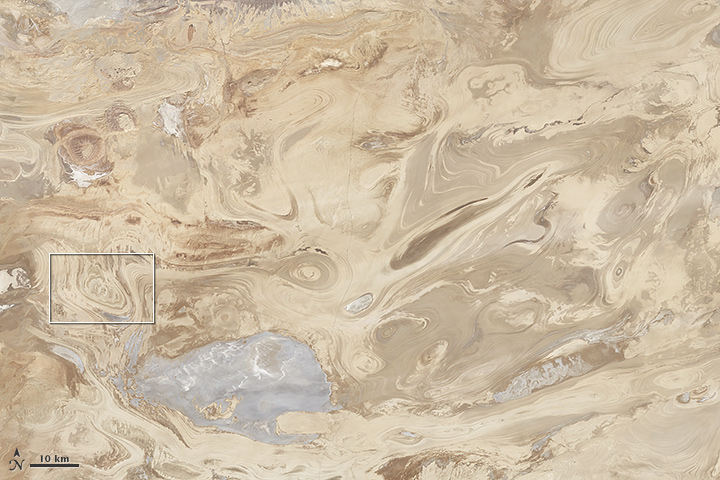 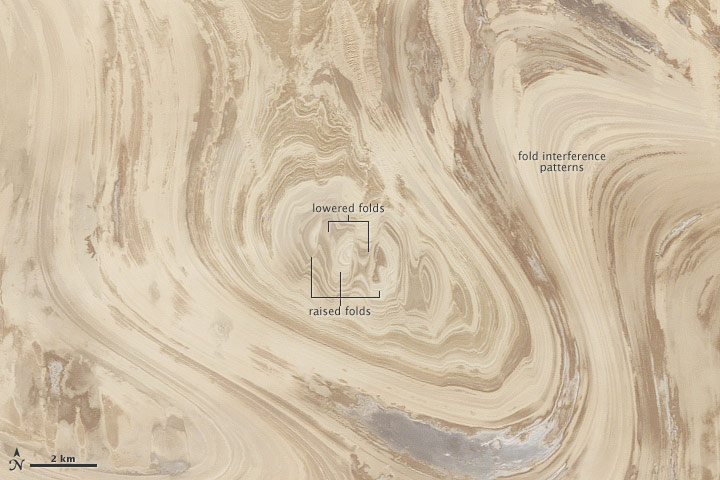 Roughly 300 kilometers (200 miles) east-southeast of Tehran lies Iran’s Dasht-e Kavir, or Great Salt Desert. To the untrained eye, Dasht-e Kavir looks like a place that has been bone-dry since the dawn of time. But to the well-trained eyes of a geologist, this desert tells a tale of wetter times. Tens of millions of years ago, a salt-rich ocean likely occupied this region, surrounding a microcontinent in what is now central Iran.

The Thematic Mapper on the Landsat 5 satellite captured this natural-color image of Dasht-e Kavir on October 15, 2011. The top image is a wide-area view, and the area outlined in white is then shown in the close-up view below.

Dasht-e Kavir is a complex landscape, but it can be mostly explained by the invasion and subsequent evaporation of an ancient ocean. As the ocean dried up, it left behind a layer of salt as much as 6 to 7 kilometers (4 miles) thick. Salt has a fairly low density, so if a layer of new rock buries the salt layer—and if that overlying rock is soft enough—the salt can slowly push up through it and form domes.

As its name implies, the Great Salt Desert is rich in salt domes, or diapirs. Geologists have identified about 50 large salt diapirs in this region. Like any other surface feature, a salt dome is subject to erosion. Wind and rain scrape away particles of rock, gradually wearing away the top of the dome and exposing it in cross-section.

But erosion is not the only force at work in this region. In the close-up view, we can see north-south-trending structures, some raised and some lowered. Callan Bentley, a geologist at Northern Virginia Community College, identifies them as folds or fault zones that run parallel to the trend of the region’s mountains. Bentley attributes the deformation of the salt domes to plate tectonic activity that has occurred since the salt domes formed. Bentley describes the landscape as a “a palimpsest tale that helps constrain the age of the diapirism to pre-folding.” 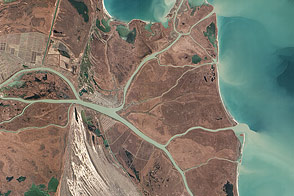 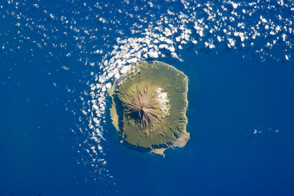