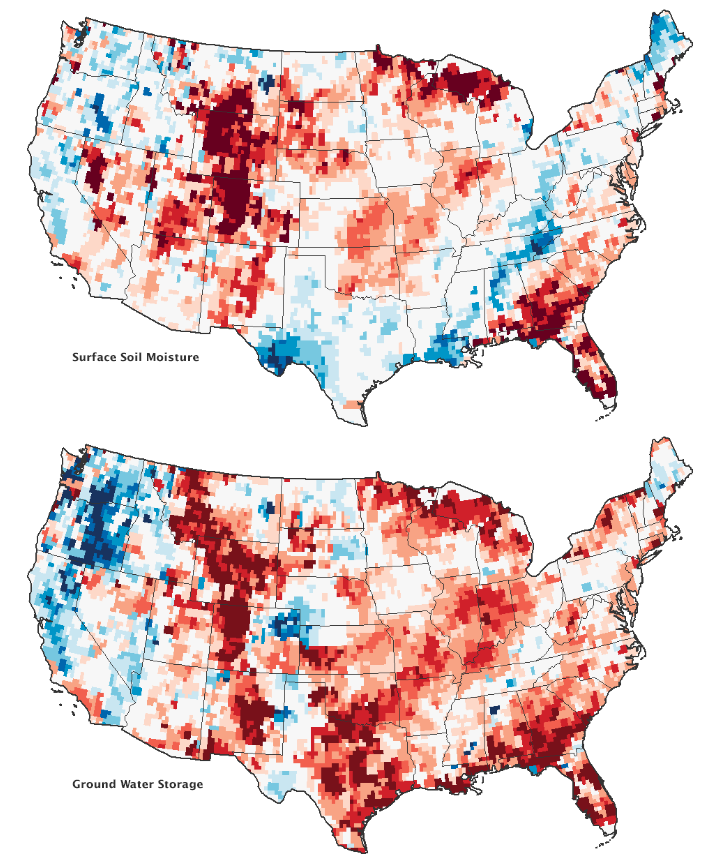 The deep drought in the United States that has fueled wildfires, damaged crops, and caused near record-low water levels on the Mississippi River continued through January 2013. Though there has been some relief from a series of winter storms, a pair of satellites operated by NASA show that groundwater supplies continue to be unusually low in many parts of the country.

The maps above combine data from the twin satellites of the Gravity Recovery and Climate Experiment (GRACE) with other satellite and ground-based measurements to model the relative amount of water stored near the surface and underground. The top map shows moisture content in the top 2 centimeters (0.8 inches) of surface soil as observed between January 8 and January 14, 2013; the bottom map shows the abundance of groundwater in aquifers. The soil moisture map depicts short-term conditions, while the groundwater map offers a longer-term perspective.

The wetness, or water content, of each layer is compared to the average between 1948 and 2009. In the soil moisture map (top), the streak of blue that stretches from the lower Mississippi Valley through Maine is evidence of weather systems that moved through the area during the past week, dropping rain and snow in some areas. However, the groundwater map (bottom) shows that these storms have not yet replenished the parched aquifers underground. Groundwater levels remain at very low levels in many parts of the country, particularly in the Rockies, the Great Plains, and the Southeast.

Maps by Chris Poulsen, National Drought Mitigation Center at the University of Nebraska-Lincoln, based on data from Matt Rodell, NASA Goddard Space Flight Center, and the GRACE science team. Caption by Adam Voiland. 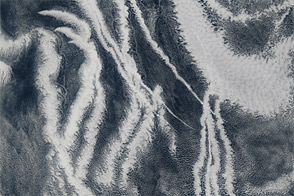