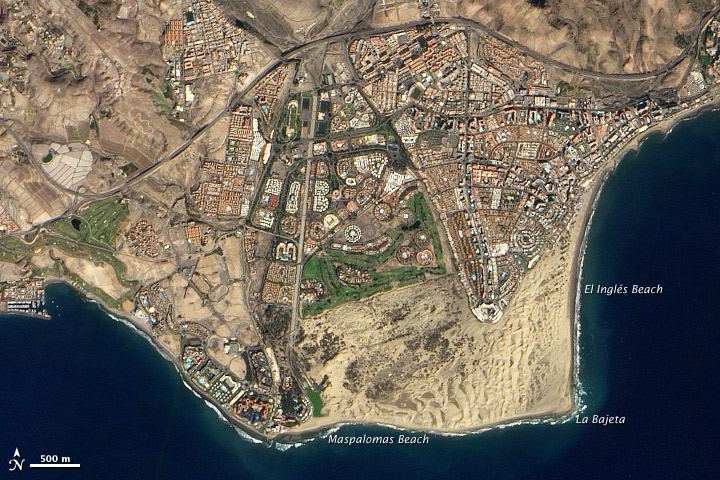 Situated in the center the of the Canary Islands archipelago, Gran Canaria is a roughly circular volcanic island. Along the island’s southern perimeter lies a dune-beach system, a sandy triangle pointing toward the southeast and Africa. Both the beach and the dunes are popular vacation spots.

The sediments for the beach sands come from eroded rocks both above and below the ocean surface, and wind and waves move that sand from one place to another. However, the sandy deposits are gradually diminishing under the combined pressure of human and natural causes.

Most of the time, winds in this region blow from the west-southwest; but more powerful winds from the east-northeast play a greater role in moving sand. Sand travels from El Inglés Beach toward Maspalomas Beach, and the Maspalomas dunes march toward the southwest. A 2007 study found that beach kiosks along El Inglés Beach have interrupted the transport of sand toward the southwest by blocking the winds that carry it. Officials took steps to reduce the number of kiosks and move them each season starting in 1995, but the authors of the 2007 study found lasting effects on the dunes: “Mobile dunes are moving westward and are not being replaced by new ones.”

Hotels, beach kiosks, and the several million tourists who visit the area each year put pressure on the natural landscape, but not all of the changes in Gran Canaria’s dune-beach system are due to human influence. A study published in 2005 concluded that the supply of beach sediments from the coastal shelf in this region is weak. And a 2009 study found that storm waves erode El Inglés and Maspalomas beaches faster than the sediments are replenished. “In a long-term scale, an erosive trend will implicate the retreat of El Inglés Beach as a sandy beach,” Alcántara-Carrió et al wrote, “while Maspalomas Beach could be transformed to a rocky coast, without much sand.”