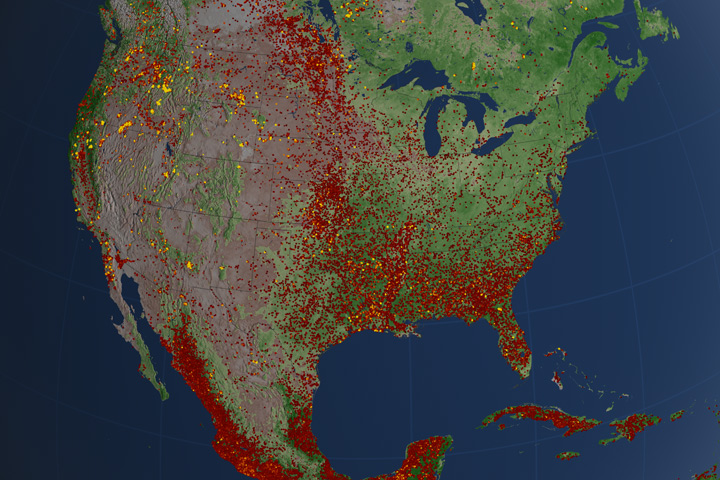 Records maintained by the National Interagency Fire Center (NIFC) and NASA both indicate that 2012 was an extraordinary year for wildfires in the United States.

NIFC statistics show that more than 9.1 million acres had burned as of November 30, 2012—the third highest total in a record that dates back to 1960. Also notable: despite the high number of acres burned in 2012, the total number of fires—55,505—was low, the least on the NIFC record. Average fire size in 2012 was the highest on the record.

Louis Giglio, a scientist based at NASA’s Goddard Space Flight Center, offered a summary of the 2012 U.S. wildfire season during a press conference at the fall 2012 meeting of the American Geophysical Union. Giglio helps maintain a different record of area burned per year that is part of the Global Fire Emissions Database (GFED), an ongoing effort to track the world’s fire emissions. The GFED records are based largely on data acquired by the two Moderate Resolution Imaging Spectroradiometer (MODIS) instruments on NASA’s Terra and Aqua satellites. Giglio said that 2012 will almost certainly break the GFED record, though final numbers won’t be available for a month or so.

The visualization above depicts fires that burned between January 1 and October 31, 2012, as detected by the MODIS instruments. Yellow and orange indicates fires that were more intense and had a larger area of active burning. Most of these intense fires occurred in the western United States, where lightning and human activity often sparks blazes that firefighters cannot contain. Many of the lower intensity fires shown in red were prescribed fires, lit for either agricultural or ecosystem management purposes.

There’s more than one way to tally fire statistics, but it has been a busy year for fires in the United States no matter how you count them.