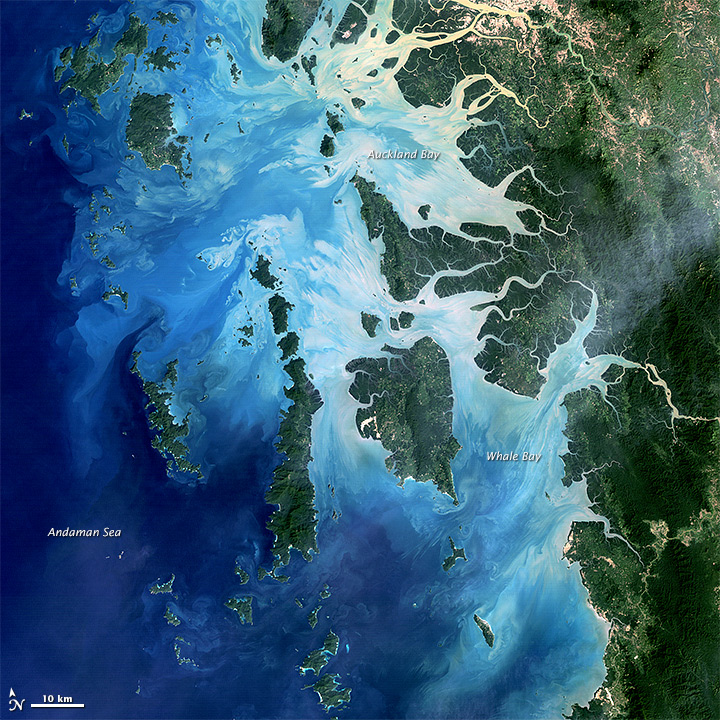 In the southernmost reaches of Burma (Myanmar), along the border with Thailand, lies the Mergui Archipelago. The archipelago in the Andaman Sea is made up of more than 800 islands surrounded by extensive coral reefs.

This natural color image acquired by Landsat 5 on Dec. 14, 2004, shows the middle portion of the archipelago, including Auckland and Whale Bays. Swirling patterns are visible in the near-shore waters as sediments carried by rivers slowly settle out and are deposited on the seafloor. The heavy sediment loads make the river appear nearly white. As those sediments settle out, the seawater appears deeper shades of blue. The tropical rainforests of the region appear deep green.

Captain Thomas Forrest of the East India Company first described the region to Europeans after a 1782 expedition in search of potential sugar-growing lands. At that time, the islands were mainly inhabited by a nomadic fishing culture. These people, known as the Moken, still call the archipelago home and mostly live a hunter-gatherer lifestyle. As of 2006, 2,000 Moken were known to inhabit the Burmese portion of Mergui.

The small population of the archipelago has helped preserve its high diversity of plants and animals. In 1997, Burma opened the region to foreign tourism and in the years since it has become a major diving destination. A valued species of pearl oyster (Pinctada maxima) are found in nearby waters. Today, overfishing is emerging as a regional problem.

Composed of more than 800 islands surrounded by extensive coral reefs, the region shelters a high diversity of plants and animals.