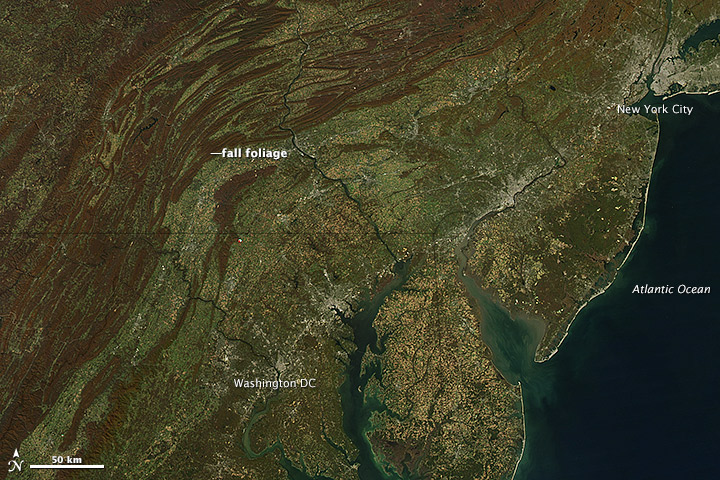 With temperatures dropping in the northern hemisphere, fall colors have swept across the Mid-Atlantic. The Moderate Resolution Imaging Spectroradiometer (MODIS) on NASA’s Aqua satellite captured this natural-color image on October 22, 2012. The brownish-red areas in the Appalachians are hardwood forests dominated by oaks; the yellower shades in the Delmarva Peninsula are evidence of corn or soybean crops, not fall foliage.

In the fall, leaves change colors as they lose chlorophyll, the molecule that plants use to synthesize food. Chlorophyll makes plants appear green because it absorbs the red and blue light from sunlight as it strikes leaf surfaces. However, chlorophyll is not a stable compound and plants have to continuously synthesize it, a process that requires ample sunlight and warm temperatures. So when temperature drop and days shorten in autumn, levels of chlorophyll do as well.

As concentrations of chlorophyll drop, the green color of leaves fades away, presenting an opportunity for other pigments within leaves—carotenoids and anthocyanins—to show off their colors. Carotenoids absorb blue-green and blue light, so in the absence of chlorophyll, they cause leaves to appear yellow. Anthocyanins absorb blue, blue-green, and green light, so light reflecting off the pigment appears red.

The range and intensity of autumn colors is strongly affected by the weather. Both low temperatures and bright sunshine destroy chlorophyll. So if the weather stays above freezing, it is easier for anthocyanins to form. Dry weather, which increases the sugar concentration in sap, also increases the amount of anthocyanin. So the brightest autumn colors occur when dry, sunny days are followed by cool, dry nights.