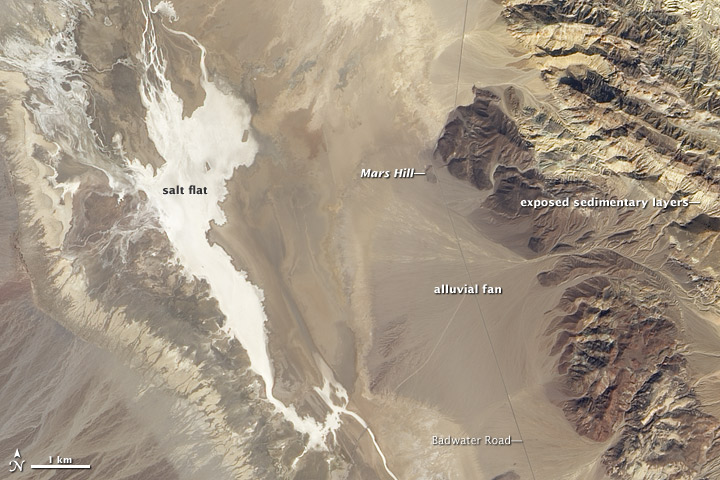 With its seven minutes of terror and a spectacular rocket-assisted landing behind it, the SUV-sized Mars rover Curiosity now finds itself just where scientists wanted it: at the northern edge and rim of Gale Crater. What’s remarkable is how familiar the landscape looks.

“You would really be forgiven for thinking that NASA was trying to pull a fast one on you, and we actually put a rover out in the Mojave Desert and took a picture,” said project scientist John Grotzinger during a press conference.

Curiosity has begun its expedition near a fan-shaped apron of sediment called an alluvial fan, which likely formed when liquid water spilled down the side of Gale Crater, through a network of valleys, and onto the crater floor. Adjacent to the alluvial fan and quite near the rover, there is also an intriguing, light-colored “high thermal inertia” deposit with rocks that retain heat well. (Click here for a map that shows the locations of the rover and the deposit, and click here for one that shows the alluvial fan. Many of the latest images related to Curiosity's mission are here.)

Visitors to Badwater Basin area in California’s Death Valley National Park might see similarities in the images Curiosity has been sending home. The Badwater Basin is dense with alluvial fans like the one in Gale Crater. The alluvial fans in Death Valley are produced by occasional, intense storms that send storm water rushing down canyons in the otherwise arid slopes of the Panamint and Amargosa mountain ranges.

In the image above, captured in 2002 by the Advanced Land Imager on NASA’s Earth Observing-1 (EO-1) satellite, numerous alluvial fans are visible. Water has transported tan sediment from the mountains (far right), depositing it in the series of fan-shaped patterns near the center of the image.

This part of Death Valley shares other characteristics with Martian landscapes, and the area has long been a favorite for scientists planning for Mars landing sites. Wind, volcanism, and alternating wet and dry conditions have left similar marks on the rocks of both Mars and the Mojave Desert. The dark patch north of the largest alluvial fan has even been called Mars Hill for decades due to similarities to the rocks observed at the Viking 1 landing site from the 1970s. Mars Hill is the toe of an old alluvial fan, comprised of basaltic cobbles and gravels that stick out of the overlying, younger sediments.

The salt pan on the left is another feature that makes this part of Death Valley interesting to Mars researchers. Badwater Basin and Gale Crater are both enclosed basins with no outflows, so the water flowing into them would form temporary lakes and eventually salt flats after the water evaporates.

Of course, there are also major differences between the geology of Death Valley and Gale Crater. “Death Valley is a much younger and more dynamic place than Gale Crater, ” explained Aaron Zent, a planetary scientist at NASA’s Ames Research Center. “The valley floor is still sinking relative to the surrounding ranges, and more and more sediment is brought in, producing a sedimentary sequence that is mostly buried, with just a bit of salt on top. At Gale, the sediments, of whatever origin, are on top of the original crater floor and extensive salts, if present, are on the bottom and buried. If young, they may have been eroded and redistributed by the wind.”

The new robotic Mars rover landed at the foot of a fan-shaped sediment deposit reminiscent of formations in Death Valley.