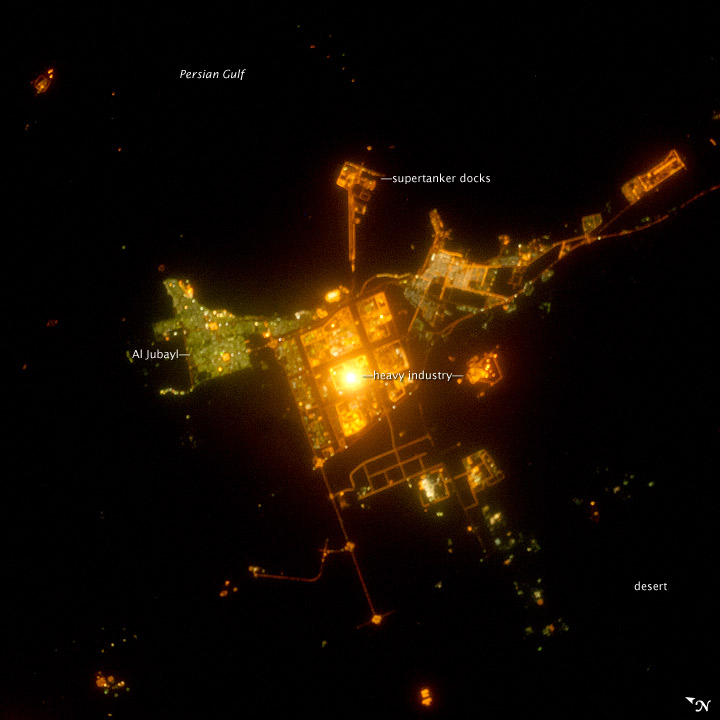 The city of Al Jubayl (or Jubail) is located on the coast of Saudi Arabia, along the Persian Gulf. The city has a history extending back more than 7,000 years, but since 1975 it has been associated with the petrochemical, fertilizer, and steel industries. At night, these industrial areas form a brightly lit region (image center) to the south of the residential and commercial center of Al Jubayl (characterized by green-gray lighting). An artificial peninsula extending into the Persian Gulf to the northeast hosts supertanker docks and petroleum storage facilities.

The Persian Gulf to the north and northeast is devoid of lights; likewise, the open desert to the south-southeast provides a stark contrast to the well-lit urban and industrial areas. A bright circle of light located within the heavy industrial area (image center) cannot be resolved in this astronaut photograph, but is likely a concentration of lights associated with ongoing processing or construction activities. The approximate scale of the feature—100s of meters in diameter—is consistent with multiple stationary light sources, particularly if the light from those sources is accentuated due to the camera’s low light settings.

Astronaut photograph ISS031-E-143143 was acquired on June 19, 2012 with a Nikon D3S digital camera using a 200 mm lens, and is provided by the ISS Crew Earth Observations experiment and the Image Science & Analysis Laboratory, Johnson Space Center. The image was taken by the Expedition 31 crew. The image in this article has been cropped and enhanced to improve contrast. Lens artifacts have been removed. The International Space Station Program supports the laboratory as part of the ISS National Lab to help astronauts take pictures of Earth that will be of the greatest value to scientists and the public, and to make those images freely available on the Internet. Additional images taken by astronauts and cosmonauts can be viewed at the NASA/JSC Gateway to Astronaut Photography of Earth. Caption by William L. Stefanov, Jacobs/ESCG at NASA-JSC. 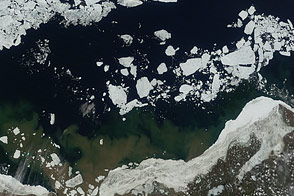