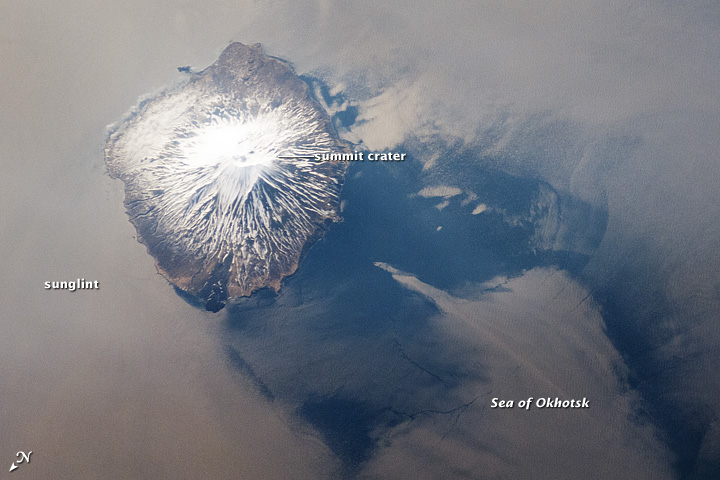 The Kuril Island chain extends from the Kamchatka Peninsula to Japan and contains numerous active volcanoes along its length. This astronaut photograph highlights Alaid Volcano, the highest (2,339 meters above sea level) volcano in the chain, as well as the northernmost. The textbook cone-shaped morphology of this stratovolcano is marred only by the summit crater, which is breached to the south (image center) and highlighted by snow cover. The volcano rises 3000 meters from the floor of the Sea of Okhotsk, with the uppermost part of the volcano exposed as an island.

Much of the sea surface surrounding the volcano has a silver-gray appearance. This mirror-like appearance is due to sunglint, where light reflects off the sea surface and is scattered directly towards the observer on the International Space Station. Sunglint is largely absent from a zone directly to the west of the volcano, most likely due to surface wind or water currents that change the roughness—and light scattering properties—of the water surface. (Note that the image is oriented so that north is to the lower left.)

Volcanoes in the Kurils and similar island arcs in the Pacific “ring of fire,” are fed by magma generated along the boundary between two tectonic plates, where one plate is being driven beneath the other (a process known as subduction). Alaid Volcano has been historically active, with the most recent confirmed explosive activity in 1996.

Astronaut photograph ISS031-E-41959 was acquired on May 18, 2012, with a Nikon D2Xs digital camera using a 180 mm lens, and is provided by the ISS Crew Earth Observations experiment and Image Science & Analysis Laboratory, Johnson Space Center. The image was taken by the Expedition 31 crew. It has been cropped and enhanced to improve contrast, and lens artifacts have been removed. The International Space Station Program supports the laboratory as part of the ISS National Lab to help astronauts take pictures of Earth that will be of the greatest value to scientists and the public, and to make those images freely available on the Internet. Additional images taken by astronauts and cosmonauts can be viewed at the NASA/JSC Gateway to Astronaut Photography of Earth. Caption by William L. Stefanov, Jacobs/ESCG at NASA-JSC.

The highest volcano in the chain has a nearly perfect cone shape.