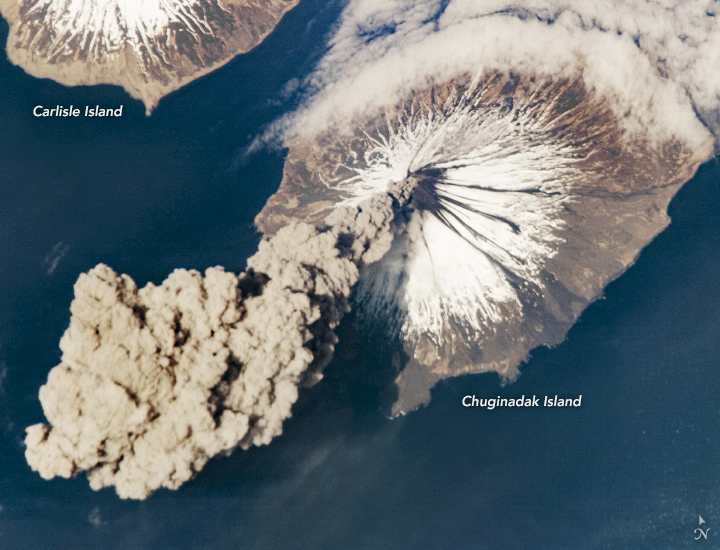 At 3:00 p.m. Alaska Daylight Time on May 23, 2006, flight engineer Jeff Williams from International Space Station (ISS) Expedition 13 contacted the Alaska Volcano Observatory (AVO) to report that the Cleveland Volcano had produced a plume of ash. Shortly after the activity began, he took this photograph. This picture shows the ash plume moving west-southwest from the volcano’s summit. A bank of fog (upper right) is a common feature around the Aleutian Islands. The event proved to be short-lived; two hours later, the plume had completely detached from the volcano (see image from May 24). The AVO reported that the ash cloud height could have been as high as 6,000 meters (20,000 feet) above sea level.

Situated on the western half of Chuginadak Island, Cleveland Volcano is one of the most active in the Aleutian Islands, which extend west-southwest from the Alaska mainland. It is a stratovolcano composed of alternating layers of hardened lava, compacted volcanic ash, and volcanic rocks. At a summit elevation of 1730 meters, this volcano is the highest in the “Islands of the Four Mountains” group. Carlisle Island to the north-northwest, another stratovolcano, is also part of this group.

Magma that feeds eruptions of ash and lava from the Cleveland Volcano is generated by the northwestward movement of the Pacific Plate beneath the North American Plate. As one tectonic plate moves beneath another—a process called subduction—melting of materials above and within the lower plate produces magma that can eventually move to the surface and erupt through a vent (such as a volcano). In 1944, Cleveland Volcano claimed the only known eruption-related fatality in the Aleutian Islands.

Astronaut photograph ISS013-E-24184 was acquired May 23, 2006, with a Kodak 760C digital camera using an 800 mm lens, and is provided by the ISS Crew Earth Observations experiment and the Image Science & Analysis Group, Johnson Space Center. The image in this article has been cropped and enhanced to improve contrast. Lens artifacts have been removed. The International Space Station Program supports the laboratory to help astronauts take pictures of Earth that will be of the greatest value to scientists and the public, and to make those images freely available on the Internet. Additional images taken by astronauts and cosmonauts can be viewed at the NASA/JSC Gateway to Astronaut Photography of Earth.

The Cleveland Volcano in the Aleutian Islands emitted a plume of volcanic ash on May 23, 2006.

Arcing southwestward from Alaska like the tail of a kite, the Aleutian Islands are a string of active and dormant volcanoes fed by magma created by the collision of the Pacific Plate with the North American Plate. In the northeast part of the range, a cluster of summits known as the Islands of the Four Mountains is home to Cleveland Volcano, one of the Aleutians’ most frequently active volcanoes.