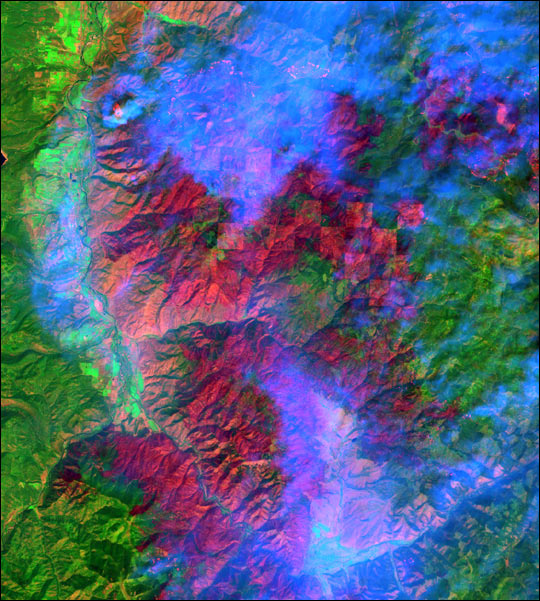 This false-color image over the Bitterroot National Forest, Montana, was made using data acquired on Aug. 14 by Landsat 7's Enhanced Thematic Mapper plus (ETM+). As of Aug. 21, more than 200,000 acres (300 square miles) of the Bitterroot have burned and hundreds of people in the area have been evacuated from their homes. In all, about 30 large blazes across Montana have burned more than 600,000 acres (937 square miles). In this image, dull red pixels show recent burn scars, while bright red pixels depict the flaming portions of the burn. (Look underneath the blue smoke at the top of the image.) The green pixels show vegetated regions not burned. The image was made using a combination of ETM+ Bands 7, 4, 1 (shortwave infrared, near-infrared, and blue wavelengths, respectively.)

Nationally, there were about 90 wildfires burning that have consumed an estimated 1,393,426 acres (2,177 square miles) across 10 states, according to the National Interagency Fire Center in Boise, Idaho. There were significant wildfires in Arizona (3), California (1), Florida (2), Idaho (28), Nevada (6), Oregon (1), Texas (3), Utah (3), and Wyoming (10). It appears that most of the blazes were ignited by lightning strikes, although some have been attributed to human error.