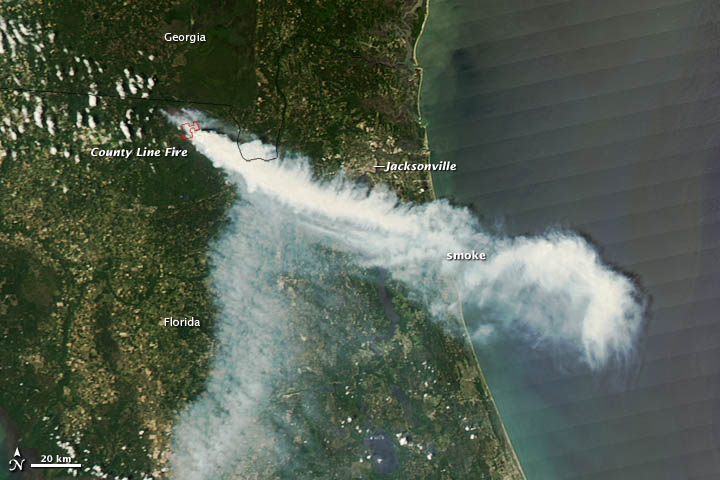 When lightning struck Osceola National Forest’s Pinhook Swamp on April 5, 2012, it hit vegetation primed for wildfire. Long-term drought in the Southeast had left water levels in the swampy areas of northern Florida and southern Georgia at historically low levels, making the palmetto and gallberry in the area extremely flammable. The wildfire that emerged, known as the County Line Fire, had burned nearly 35,000 square acres by April 13, 2012.

This image, taken by the Moderate Resolution Imaging Spectroradiometer (MODIS) instrument on NASA’s Aqua satellite on April 11 at 2:25 PM local time (18:25 UTC), shows the dense smoke the fire has produced. Winds have shifted the direction of the smoke plume multiple times, but communities surrounding Jacksonville have been the most severely affected.

Fine particles and gases within smoke pose a risk to human health. Smoke irritates the eyes and the respiratory system, and it can cause bronchitis or even aggravates heart or lung disease. Much of Florida has experienced Code Yellow air quality conditions connected to the fire, and Code Red and Code Purple conditions have occurred in areas nearest to the fire.

To date, nearly 1,400 wildfires had burned about 90,000 square acres in Florida. The County Line Fire has proven difficult to contain because it is burning vegetation below the surface. On April 13th, authorities considered the fire 50 percent contained; they expect it will be completely contained by April 16th. 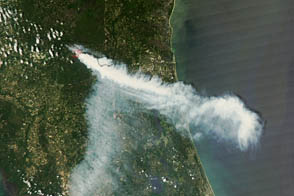 Thick smoke billowed from a fire in Osceola National Forest.