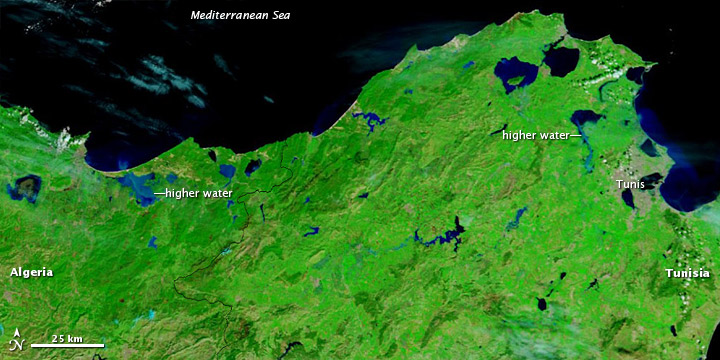 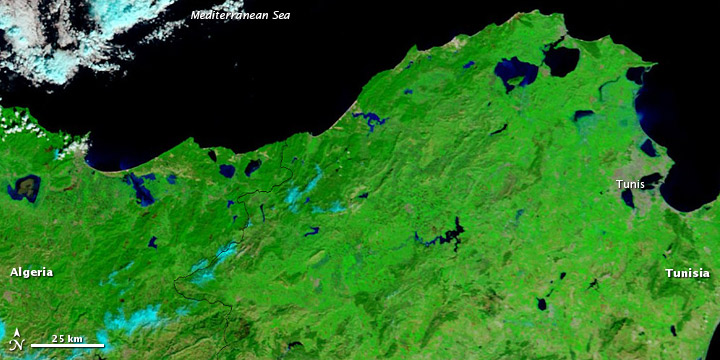 A combination of melting snow, overflowing rivers, and heavy rains flooded parts of northwestern Tunisia in late February 2012. The Tunisian Army evacuated residents of multiple towns in the region of Tunis, according to Tunisia Live. Flood waters reached rooftops in some areas, and at least one vehicle was swept away by fast-moving water. As of February 23, at least two people were confirmed dead, and one person had been reported missing.

The Moderate Resolution Imaging Spectroradiometer (MODIS) on NASA’s Terra satellite captured the top image on February 28, 2012. For comparison, the bottom image shows the same region on February 19, 2012. Both images use a combination of visible and infrared light to better distinguish between water and land. Water is blue. Vegetation is bright green. Bare ground and urban areas are earth-toned. Clouds are pale blue-green.

These images show the coastal region of northwestern Tunisia and northeastern Algeria. Multiple water bodies appear enlarged on February 28, and two lakes—one near the city of Tunis and the other west of the Tunisia-Algeria border—are clearly higher. The electric blue of the Algerian lake suggests the presence of sediment, perhaps carried there by flood waters.