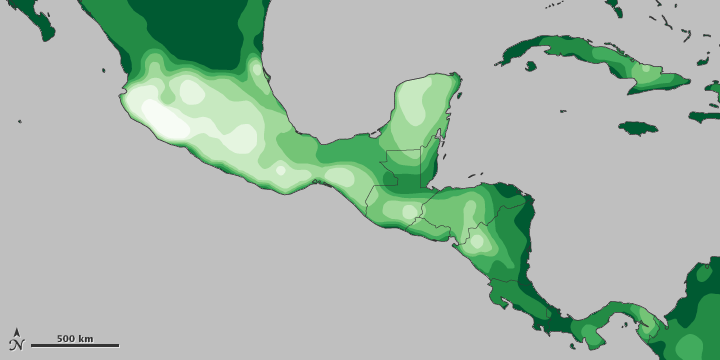 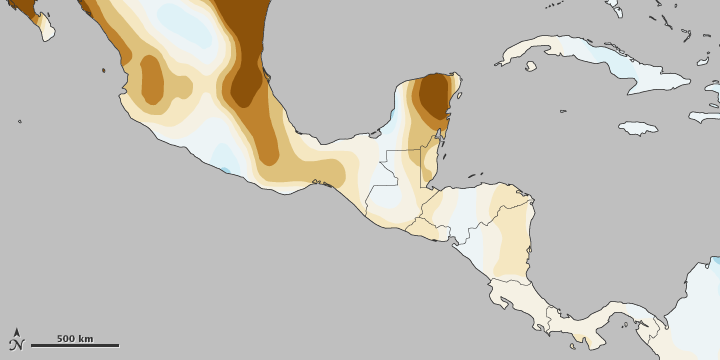 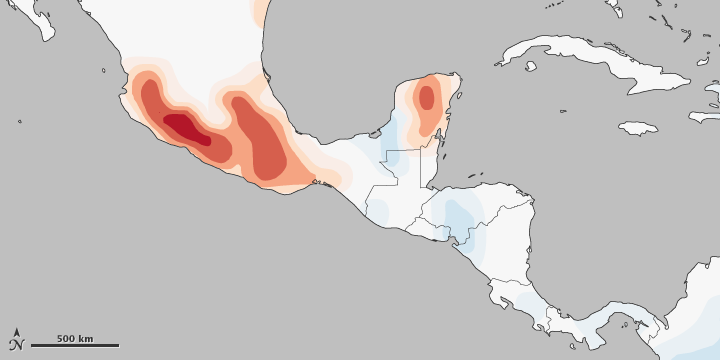 Sometime during the ninth century A.D., an apparently prosperous Mayan society collapsed within decades. Why? Could the collapse of the Mayan civilization be a warning to us today?

One possible explanation for the downfall is drought. Central America is naturally prone to drought, but one recent study suggests that Mayan activities may have deepened the dry conditions. In an effort to sustain one of the highest population densities in history, the Mayans transformed the land. They removed nearly all of the forest and replaced it with agricultural crops.

The top map shows how little native forest (dark green) remained at the end of the Mayan period around 950 AD. By cutting down the forest, the Mayans changed their local climate. When NASA scientist Ben Cook examined land use for the era in the Goddard Institute for Space Studies general circulation model, he found that the climate was warmer and drier during the rainy season (June, July, and August) than it would have been had natural forest remained in place. Though deforestation didn’t cause a drought, it amplified natural droughts when they occurred. The center and lower images illustrate the change. Places that are drier (brown) and warmer (red) than normal correspond to areas where the forest had been cleared.

How could cutting a forest have such a big impact? Plants interact with the atmosphere. Dark plants—such as dense tropical forest—absorb a lot of energy from the Sun. Lighter colored plants (crops) reflect some energy. When a forest is replaced by lighter colored plants, the land reflects more sunlight, which cools the atmosphere. Cool air sinks, while water vapor needs to rise and condense to create a rainstorm. Without warm, unstable air rising into the atmosphere, rainstorms became less common. The drying pattern is shown in the center image.

The lack of rain helped raise temperatures on land. When energy from the Sun reaches the ground, it either heats the ground or it causes water to evaporate from the soil or transpire from plants. With forests producing less moisture and croplands holding less water, droughts deepened as more and more of the Sun’s energy heated the ground, (lower image).

Today, much of the colonial-era forest is gone, but large swaths remain on the Yucatan Peninsula. This forest may help moderate drought. But if it were cut down, Central America might become warmer and drier again.

Land use decisions may have altered climate and contributed to the collapse of Mayan society in the tenth century.