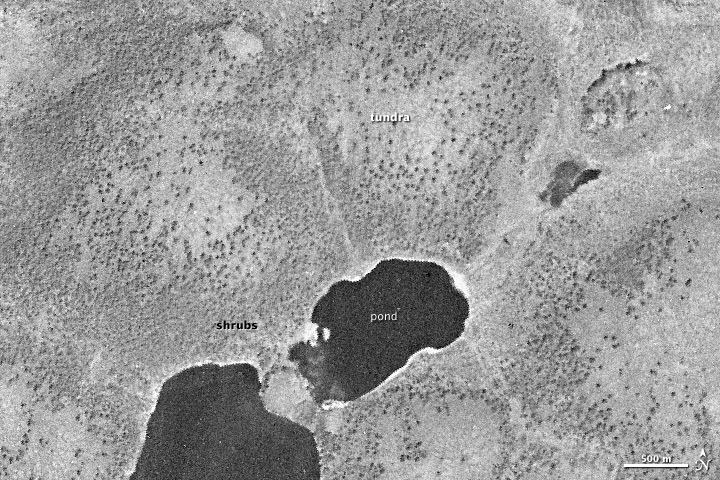 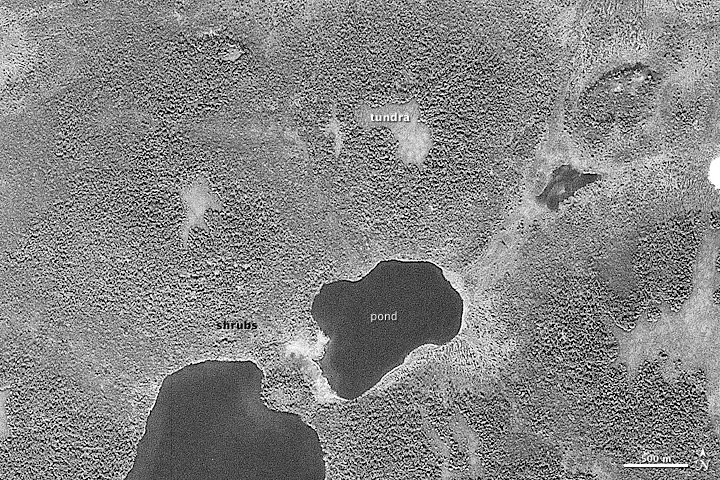 In the 2011 Arctic Report Card, scientists concluded that the Arctic environment has undergone a fundamental shift in conditions. Recent years—warmer, greener, less icy—are likely the new normal for the Far North. One sign of the Arctic’s ongoing transformation is the spread of shrubs across the tundra.

The pair of images above show a site on the Siberian tundra near Russia’s Yennisey River as they appeared in the summers of 1966 (top) and 2009 (bottom). The top image is from Gambit, a declassified spy satellite, and the lower image is from GeoEye-1, a commercial satellite. In the 43 years between images, shrubs colonized virtually all the previously open tundra around a cluster of lakes. The images are from a study done by Gerald Frost, a Ph.D. student at the University of Virginia.

The conversion of tundra to dense shrubland triggers a cascade of changes in how the ecosystem functions. Observations from Europe, Alaska, and Siberia in recent decades have shown plant communities became less diverse as mosses, lichens, and other low-growing plants disappeared under the shade of shrubs. The loss of lichens, in particular, could pose a problem for caribou and reindeer, which forage on them extensively.

The change from tundra to shrubland can also affect the thawing of permafrost. In the winter, shrubs trap snow, and the insulating effect can make the soil temperature up to 30 degrees Celsius warmer than the air temperature. In the summer, though, the shrubs provide shade, which tends to keep soil temperatures in shrub-covered areas cooler than those in open tundra.

Whether the arrival of shrubs will accelerate permafrost melting or slow it will depend on whether the summer cooling or the winter warming is stronger. The outcome of the competing influences has global implications: thawing permafrost has become another source of atmospheric carbon dioxide, the most important long-lived greenhouse gas.

Over the past forty years, shrubs have invaded the Siberian tundra, a sign that the Arctic is fundamentally changing as temperatures warm.