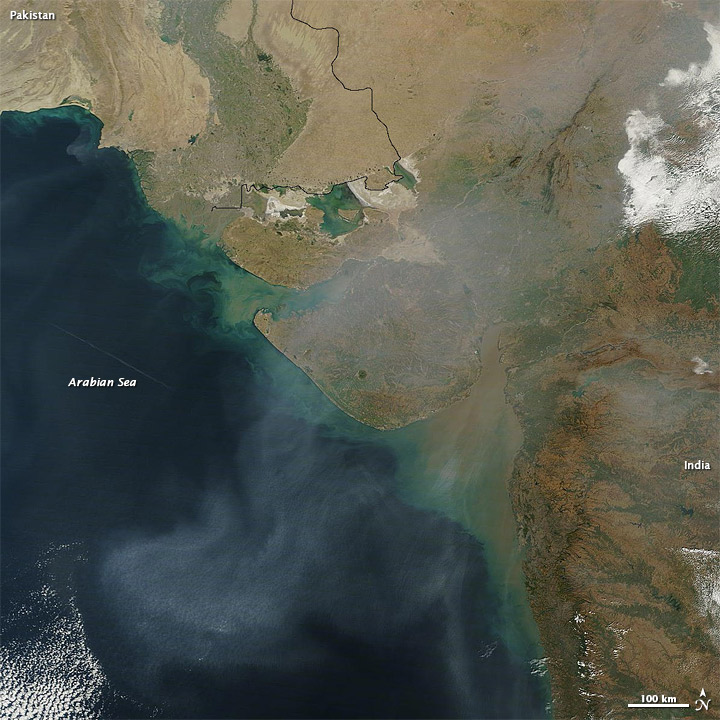 A river of haze flowed over western India and the Arabian Sea in early January 2012. The Moderate Resolution Imaging Spectroradiometer (MODIS) on NASA’s Terra satellite captured this natural-color image on January 2, 2012. The plume of translucent haze terminates over the ocean, just northeast of a cloudbank.

The haze probably results from pollution, perhaps a combination of industrial and auto pollution. In the winter months, temperature inversions often trap haze along the southern slopes of the Himalaya. In general, the higher air sits in Earth’s atmosphere, the cooler it is. As warm air rises, it expands, cools, and disperses its pollutants. During the winter, however, cold air often slides down the southern face of the Himalayan Range and is subsequently trapped under a layer of warmer air. As long as the cold air stays below the warm air, the inversion holds the pollutants in place.

On January 4, 2012, The New York Times reported high pollution levels in the Indian capital of Delhi, and attributed the pollution to a combination of automobile pollution and temperature inversions.