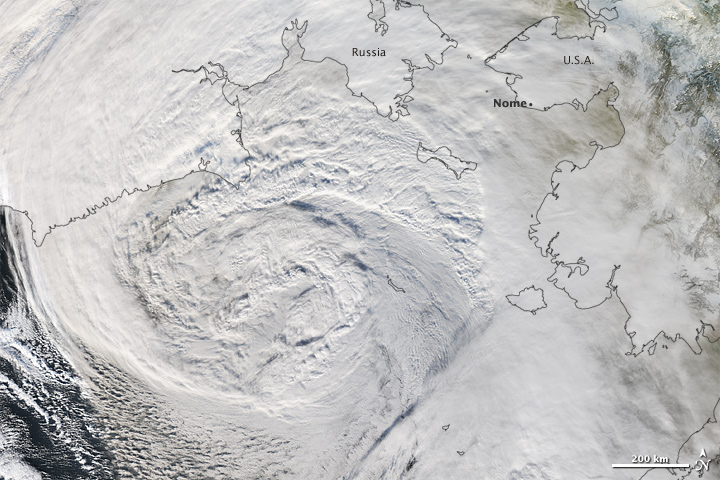 A rare, extremely powerful winter storm hit northwestern Alaska on November 8 and 9, 2011, bringing hurricane-force winds, high seas, and heavy snow. Nome, the largest community affected by the storm, was buffeted by winds gusting to 66 miles per hour and a 10-foot storm surge. The National Weather Service reported wind gusts up to 85 miles per hour in Wales, northwest of Nome. Coastal flood warnings were still in effect throughout northwest Alaska on November 10.

The storm was like a hurricane in many ways. The air pressure dropped to 945 millibars, comparable to a Category 3 hurricane. From above, the storm resembled a hurricane, as well, with bands of clouds spiraling around the low-pressure center. The Moderate Resolution Imaging Spectroradiometer (MODIS) on NASA’s Aqua satellite took this image at 2:45 p.m. local time on November 8 while the storm was still over the Bering Sea and moving northeast toward Alaska. By November 9, the storm had moved far enough to the north to be beyond the satellite’s view.

Even though the storm resembled a hurricane, its core was full of cold air, not hot air. The storm formed when a stream of warm, moist air from the Pacific Ocean clashed with cold Siberian air and moved over the Bering Sea. Strong winds blowing over a long distance allowed a storm surge to build.

It is the strongest storm to hit northwest Alaska since 1974. As of November 9, no serious injuries or extensive damage had been reported, according to the Anchorage Daily News. However, the storm did damage buildings, flood some roads, and erode beaches. See photos on KNOM Radio Mission’s photostream. 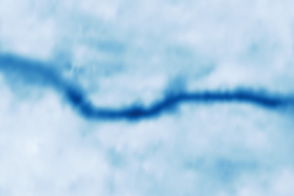