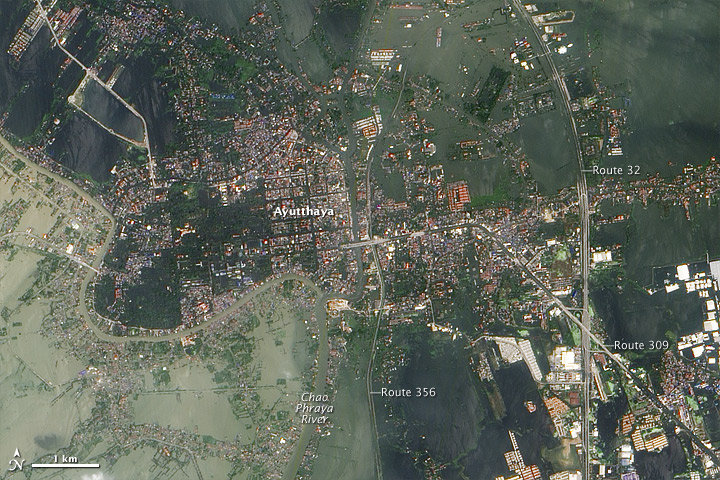 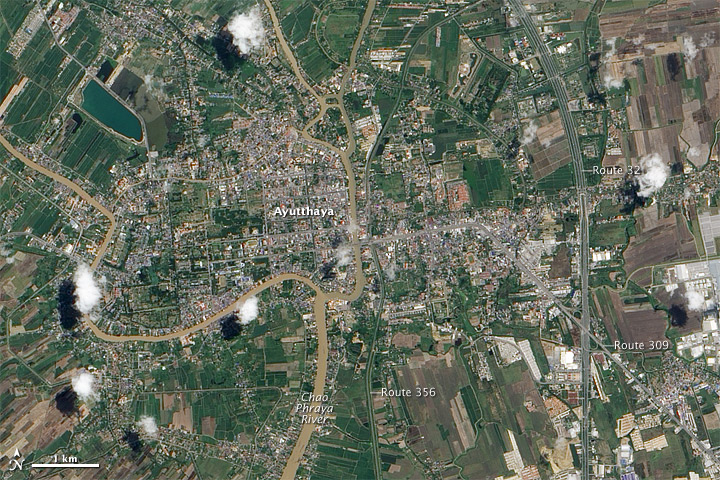 The Chao Phraya River forms at the confluence of smaller rivers in central Thailand, and flows southward to the Gulf of Thailand. En route to the sea, the river passes through Ayutthaya. First established in the fourteenth century, Ayutthaya lies north of Thailand’s capital city of Bangkok, and the floods plaguing Thailand in October 2011 did not spare this historic city.

The Advanced Land Imager (ALI) on NASA’s Earth Observing-1 (EO-1) satellite acquired these natural-color images of Ayutthaya on October 23, 2011 (top), and July 11, 2011 (bottom). In both images, the Chao Phraya River curves through the southwestern part of the city (image lower left). In October, however, the river has overflowed onto nearby floodplains, especially southwest of the river and west of Route 356. Fields, roads, and buildings have all been submerged by sediment-clogged flood water.

Thailand’s monsoon generally lasts from mid-May to September. Because these images show the region at different times of year, some of the differences in water and vegetation could result from normal seasonal variations. However, the large expanse of flood water in October 2011 is unusual even in a monsoon season.

Flooding forced the closure of manufacturing plants in Ayutthaya, according to news reports. The city is a United Nations Educational, Scientific and Cultural Organization (UNESCO) World Heritage site. On October 12, UNESCO Bangkok announced a planned assessment of flood damage to Ayutthaya, requested by the government of Thailand.

Flooding submerged large parts of the historic city of Ayutthaya, Thailand, in October 2011.