Grand New View of the Canyon 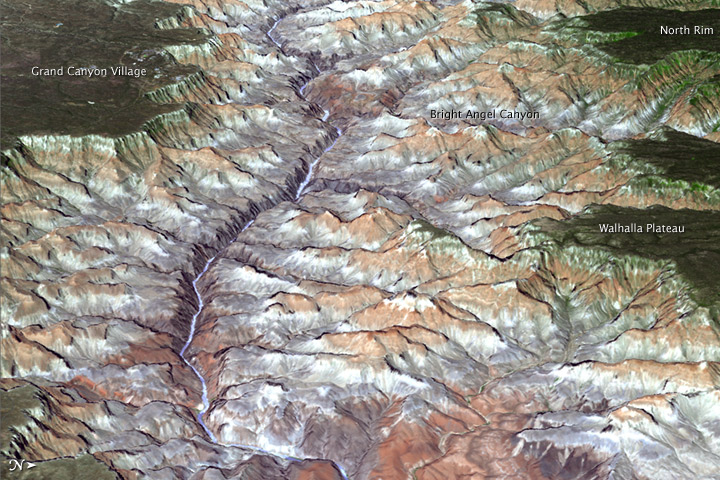 It is up to 18 miles (29 kilometers) wide and one mile (1.6 km) deep, and stretches 277 river miles (446 km). It is one of the greatest natural wonders of North America and perhaps the entire world. And thanks to a joint American and Japanese science team, we now have a new perspective on the Grand Canyon and many other topographic features of the planet.

The image above shows the eastern part of Grand Canyon National Park in northern Arizona, near 36 degrees north latitude and 112.1 degrees west longitude. It is a composite of two pieces: a synthetic natural color image captured on July 14, 2011, draped over a three-dimensional model of the area. The images and stereoscopic data behind the model were acquired by the Advanced Thermal Emission and Reflection Radiometer (ASTER) on NASA's Terra spacecraft.

The perspective is from east to west, looking down the channel of the Colorado River. North is to the right. In this view, the canyon spans 9 miles (14.5 kilometers) at its widest point and 5,600 feet (1,707 meters) from rim to river bed. The North Rim and Walhalla Plateau stand out on the right side, while Grand Canyon Village rests on the high plateau at upper left.

On October 17, 2011, NASA and Japan's Ministry of Economy, Trade and Industry (METI) released a significantly improved version of a digital topographic map of Earth based on data from ASTER. Known as a global digital elevation model, the map was created from stereo-pair images; that is, sets of two slightly offset two-dimensional images were merged to create the three-dimensional effect of depth.

The first version of the model was released by NASA and METI in June 2009. The 2011 version adds 260,000 stereo-pair images to improve spatial resolution, increase horizontal and vertical accuracy, and provide more realistic coverage over water bodies. ASTER uses 14 spectral bands (from visible to thermal infrared wavelengths) and spatial resolution of 15 to 90 meters (about 50 to 300 feet) to map 99 percent of Earth's landmass from 83 degrees north latitude to 83 degrees south.

“These data can be used for a broad range of applications, from planning highways and protecting lands with cultural or environmental significance, to searching for natural resources,“ said Mike Abrams, ASTER science team leader at NASA's Jet Propulsion Laboratory. The map is available online to users everywhere at no cost. 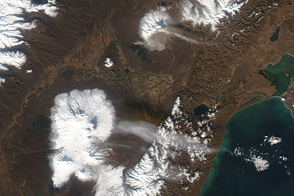