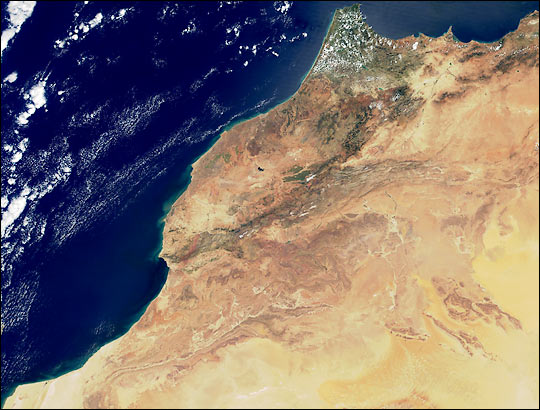 This true-color image over Morocco was acquired on April 23, 2000, by NASA's Moderate-resolution Imaging Spectroradiometer, or MODIS, flying aboard the Terra spacecraft. The image was produced using a combination of the sensor's 250-m and 500-m resolution bands. Notice the exquisite detail in the colors and textures of the variety of land surface features in northwestern Africa.

The heavily-vegetated (green pixels) peninsula in the top center of the image is the southern shore of the Strait of Gibralter--the passage between the Atlantic Ocean and the Mediterranean Sea. Notice the patchy formation of low-level cumulus clouds (white pixels) over this region, suggesting a moister climate that contributes to better plant growth. On the tip of this peninsula is the coastal city of Tangier.

Moving west along the coastline, the city of Casablanca lies about 200 miles (330 km) southwest of Tangier, and about 50 miles south of Rabat, the capital city. Both Casablanca and Rabat are visible as small grey clusters of pixels. About 200 miles due south of Casablanca, the Atlas Mountains (brownish pixels) are running in a northeasterly direction toward Algeria, Morocco's eastern neighbor.