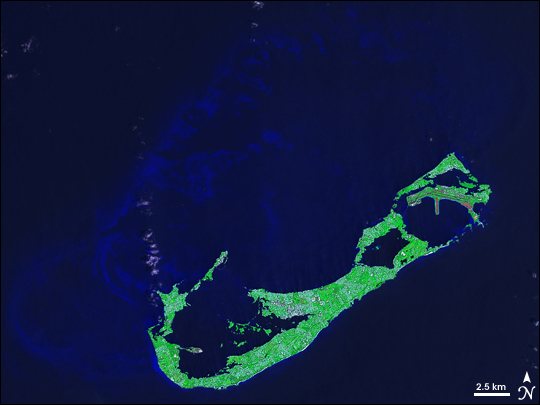 The “island” of Bermuda is actually an archipelago of more than 100 islands. The islands result from collaboration between volcanic activity, marine organisms, and weather. Although the islands once held an intimidating reputation—perhaps resulting from noisy local birds and frequent storms—they are now a popular tourist attraction.

NASA’s Landsat 7 satellite captured this image of Bermuda on August 14, 1999. Sandy beaches form bright white strips along the southeastern edge of the islands. The rest of the land is bright green from vegetation, spotted with dense white grids made by human development. The runways that form the Bermuda International Airport cover one of the larger islands in the triangular northern tip of the archipelago. Reefs north of the island create an electric-blue arch in the water.

The islands and the reef outline the edge of a circular volcanic caldera. The volcano originally formed along the same fault that produced the Mid-Atlantic Ridge. The same movement of tectonic plates that slowly pushes Europe and America farther apart has also drawn volcanoes that formed along the fault farther away from the ridge. Bermuda was pushed westward, and now lies approximately 1,030 kilometers (640 miles) east of Cape Hatteras, North Carolina.

After the volcanic ridge formed, calcite-secreting marine organisms made their home on it, building the ridge into a coral reef. As successive generations of coral built up, and their skeletons compacted into limestone, the volcanic mountain became coated with a limestone cap. When sea level fell during the Pleistocene (the Ice Age), the limestone cap poked above the water, and the limestone turned to sand. Wind blew the sand into dunes, and it eventually hardened into sandstone. Islands formed in this manner are called atolls, and while atolls are not uncommon in the Pacific, Bermuda is the only atoll in the Atlantic Ocean.

Today, Bermuda sports red soil that is high in iron, giving the tourist destination pink beaches to offset the turquoise waters. But while the soil may be pretty pink, it holds little water. Rainwater falls right through it, leaving the island with no streams or bodies of freshwater. Sinking a well on Bermuda hits water, but it’s brackish water, unfit to drink. Residents must collect rainwater on their roofs. Fortunately for the archipelago’s vegetation, rainfall is frequent. Lush vegetation nearly covers the archipelago in this image.