The East Pacific Rise from Near and Far 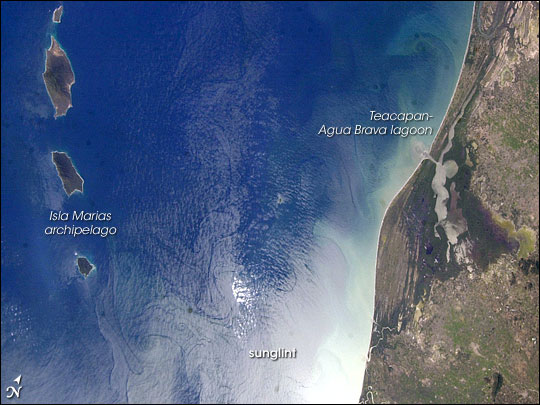 What do oceanographers and astronauts have in common? Observations of the complex interactions between different Earth systems, for one. Astronauts aboard the International Space Station routinely observe and photograph the Earth’s surface to visualize the complicated interfaces between the atmosphere, the ocean, the land, and life on the surface. Oceanographers are also interdisciplinary students of the Earth; their interests include geology, chemistry, hydrology, and biology. Currently, a team of scientists is cruising the eastern Pacific Ocean off the coast of Mexico and is preparing for submersible dives on the East Pacific Rise, part of the world’s mid-ocean ridge system.

The mid-ocean ridges are tectonic plate boundaries where new ocean crust forms. The plates move slowly apart, and lava erupts through vents and large fissures along the seafloor. Wrapping around the globe like the seams on a baseball, the mid-ocean ridge system is the largest single volcanic feature on the Earth. As part of their deep-sea expedition, the scientists will place a phone call to the astronauts on the space station to discuss their respective observations of Earth processes. Students are invited to learn more about both the oceanographic and space expeditions and to submit questions (see details at the bottom of this article.)

This image, taken by an astronaut in early 2003, shows the land-sea interactions along a section of Mexico’s west coast just south of Mazatlan and the Isla Marias archipelago. The islands are a manifestation of intersecting plate boundaries—the spreading center of the East Pacific Rise, which traces south from the Gulf of California, and the subduction zone that consumes the Cocos plate beneath southern Mexico. These islands are biologically important: they comprise the Islas Marias Biosphere Reserve and contain endemic species (found nowhere else) of raccoons and rabbits. They also provide important habitat for birds and marine life. Between the islands and the mainland, swirling surface currents are highlighted by sun glinting off the ocean surface. Along the Mexican coast, water flows out from a coastal lagoon, and nearshore currents carry sediment (light-colored water) along the beach front.

The team of oceanographers preparing to visit the East Pacific Rise is returning to a study site a few hundred miles south of Manzanillo, Mexico, where lava erupted on the sea floor in 2006, creating new oceanic crust. Hydrothermal circulation through the new crust has created warm water vents that support a community of bizarre chemosynthetic organisms. Chemosynthetic organisms get energy not from photosynthesis, but from chemicals available in the mineral-rich fluids coming from hydrothermal vents. (See the Students Experiments at Sea Website for more information on hydrothermal vents, and the mid-ocean ridge system.) The scientists will use the deep-sea exploration vehicle known as Alvin to obtain a close look at the sea floor lavas, vents, and organisms. Oceanographers who are expert geologists, chemists, and biologists are working together to understand how the new lava, circulating waters, and organisms interact and affect each other.

On Friday, January 26, 2007, Alvin scientists will make a phone call from the submersible vehicle on the East Pacific Rise to the International Space Station to talk to astronaut Suni Williams about their respective observations. Students are invited to submit questions to the scientists participating in the phone call. More information, including the student link, is provided at the Woods Hole Oceanographic Institution’s From the Seafloor to the Space Station Website.

Astronaut photograph ISS006-E-51456 was acquired in early 2003 with a Nikon 1 digital camera, and is provided by the ISS Crew Earth Observations experiment and the Image Science & Analysis Laboratory, Johnson Space Center. The image in this article has been cropped and enhanced to improve contrast. The International Space Station Program supports the laboratory to help astronauts take pictures of Earth that will be of the greatest value to scientists and the public, and to make those images freely available on the Internet. Additional images taken by astronauts and cosmonauts can be viewed at the NASA/JSC Gateway to Astronaut Photography of Earth.

What do oceanographers and astronauts have in common? Observations of the complex interactions between different Earth systems, for one. Astronauts aboard the International Space Station routinely observe and photograph the Earth’s surface to visualize the complicated interfaces between the atmosphere, the ocean, the land, and life on the surface. Oceanographers are also interdisciplinary students of the Earth; their interests include geology, chemistry, hydrology, and biology. Currently, a team of scientists is cruising the eastern Pacific Ocean off the coast of Mexico and is preparing for submersible dives on the East Pacific Rise, part of the world’s mid-ocean ridge system.