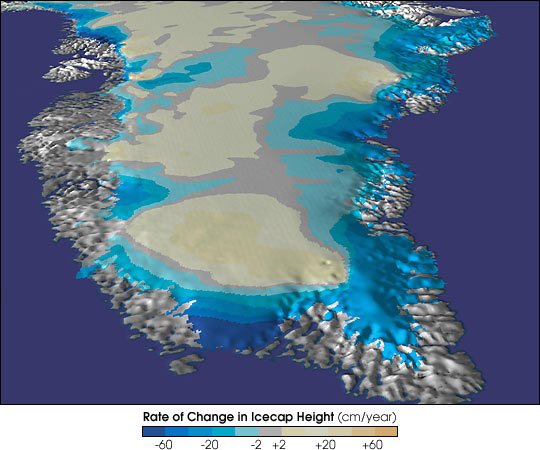 Scientists who want to monitor the state of our global climate may have to look no farther than the coastal ice that surrounds the Earth’s largest island.

A NASA study of Greenland’s ice sheet reveals that it is rapidly thinning. In an article published in the July 21 issue of Science, Bill Krabill, project scientist at the NASA Goddard Space Flight Center’s Wallops Flight Facility, Wallops Island, VA, reports that the frozen area around Greenland is thinning, in some places, at a rate of more than three feet per year. Any change is important since a smaller ice sheet could result in higher sea levels.

“A conservative estimate, based on our data, indicates a net loss of approximately 51 cubic kilometers of ice per year from the entire ice sheet, sufficient to raise global sea level by 0.005 inches per year, or approximately seven percent of the observed rise,” Krabill said.

“This amount of sea level rise does not threaten coastal regions, but these results provide evidence that the margins of the ice sheet are in a process of change,” Krabill said. “The thinning cannot be accounted for by increased melting alone. It appears that ice must be flowing more quickly into the sea through glaciers.”

For further information on the Greenland mapping project, including the technology behind the science, visit the Airborne Topographic Mapper site.