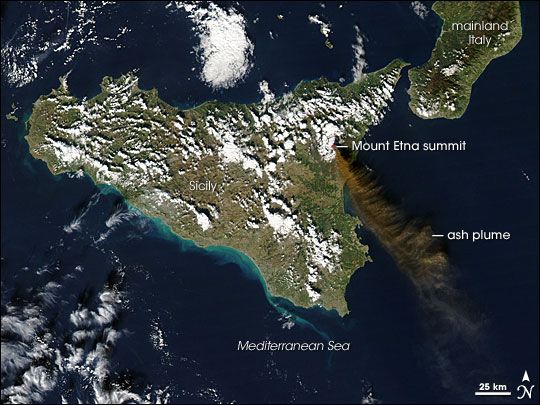 Sicily’s Mount Etna released a thick plume of volcanic ash on November 24, 2006. According to news reports, the volcanic activity forced an overnight closure of the Fontanarossa Airport, the main airport in eastern Sicily. The Moderate Resolution Imaging Spectroradiometer (MODIS) flying onboard NASA’s Aqua satellite took this picture on November 24. In this image, a dark reddish-brown plume blows away from the volcano’s summit toward the southeast, gradually dissipating as it goes. At the summit, MODIS has detected a hotspot, indicating surface temperatures much warmer than the surroundings. The bright blue color of the southern coastal waters off the island are probably due to sediment either churned up by wave action or emptied into the sea by heavy runoff from rivers and streams. The island experienced storms with heavy rain in the days preceding the image. Sediment is reflective, and it colors the shallower waters turquoise.

Mount Etna is a stratovolcano composed of alternating layers of hardened ash, lava, and rocks. Common types of eruptions at Etna are explosive ash eruptions, small lava flows, and the ejection of cinder cones. According to the Smithsonian Institution’s eruptive history for Etna, its earliest known activity could date as far back as 6190 BC, plus or minus 200 years. In 1669, an explosive eruption caused substantial damage to nearby land and forced an evacuation.