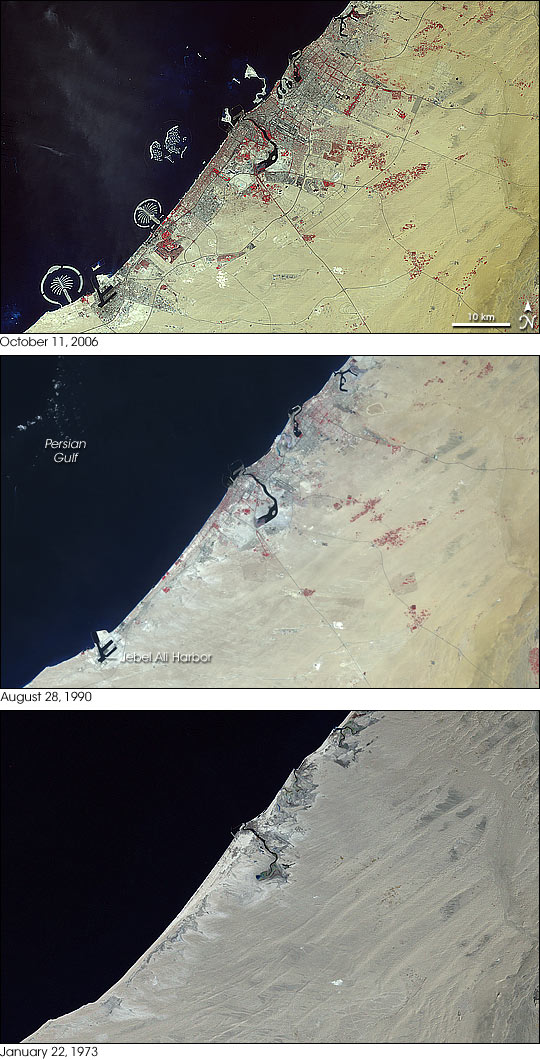 Between 1973 and 2006 dramatic changes along the coast of the United Arab Emirates follow the development of Dubai, one of the country’s seven emirates. The country is located along the eastern coast of the Arabian Peninsula where the land tapers to a sharp tip that nearly separates the Persian Gulf to the north from the Gulf of Oman to the south. This trio of images from NASA’s series of Landsat satellites shows the remarkable transformation.

Going back in time, the evidence of human engineering nearly vanishes. In the top image, captured on October 11, 2006, artificial islands shaped like palm trees stretch along the shore. Inland, irrigated vegetation stands out in red (the image is enhanced with infrared light) against the tan-colored desert. Developed areas, including numerous roads, appear cement-colored. In the middle image, captured on August 28, 1990, the number and density of roads and buildings is far less than in 2006. The area to the southwest of image center is particularly less developed. Going all the way back to January 22, 1973, the roads reaching into the desert from the coast are indistinct or absent. Very little development appears to exist along the coast. Empty sand stretches southwestward from the inlet in image center.

The city of Dubai is home to more than 1.2 million people, and it is still growing rapidly. The city’s emergence as a major metropolis and tourist destination is evident in these images.

25 Years of Growth in Las Vegas

Las Vegas experienced rapid growth between 1984 and 2009, and the growth was recorded by NASA’s long-lived Landsat 5 satellite.

25 Years of Growth in Las Vegas

Las Vegas experienced rapid growth between 1984 and 2009, and the growth was recorded by NASA’s long-lived Landsat 5 satellite.