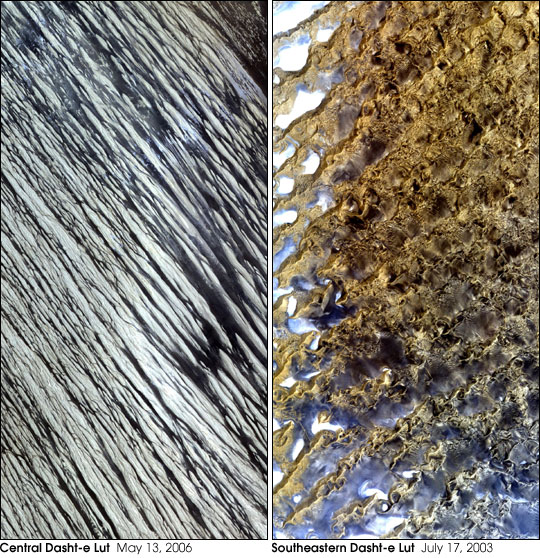 Roughly 480 by 320 kilometers (300 by 200 miles), Dasht-e Lut is a large salt desert in southeastern Iran. The desert fills a low basin that stretches southward from the Khorasan province into the Kerman province. Although the entire salt desert has just one name, it has more than one appearance. These images, captured by the Advanced Spaceborne Thermal Emission and Reflection Radiometer (ASTER) on NASA’s Terra satellite show landscapes so different, one can scarcely imagine they come from the same part of the world, let alone the same desert basin.

The picture on the left shows part of the central portion of Dasht-e Lut. The strong diagonal lines result from wind erosion that has carved deep troughs and sharp ridges into the landscape. These wind-sculpted ridges are known as yardangs, and geologic research has determined that Iran contains some of the world’s largest yardangs. ASTER acquired this image on May 13, 2006. The picture on the right shows part of the southeastern portion of Dasht-e Lut. This area consists of sand, and it contains some of the world’s tallest dunes, some reaching a height of 300 meters (1,000 feet). In this image, the white areas are saltpans—the aftermath of water that drained into the basins among the dunes and later evaporated. Golden dunes make swirling pattenrs across the image, becoming less tightly packed in the bottom of the scene. ASTER acquired this image on July 17, 2003.

Dasht-e Lut is a large salt desert in southeastern Iran. The desert fills a low basin that stretches southward from the Khorasan province into the Kerman province.