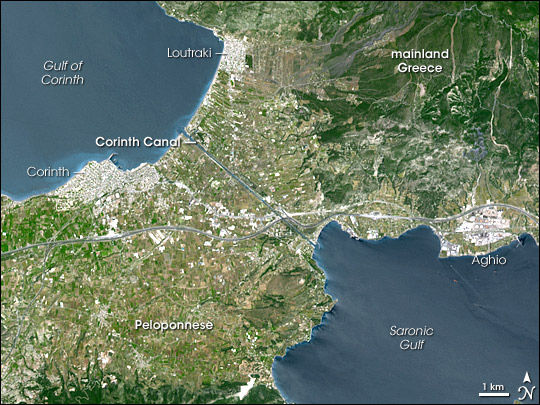 For centuries, mariners had to travel an extra 340 kilometers (185 nautical miles) between the Gulf of Corinth and the Saronic Gulf. The reason for this extra distance was a thin strip of land only about 6 kilometers (4 miles) across. The Isthmus of Corinth connects mainland Greece in the north to the Peloponnese Peninsula in the south. In the late 19th century, ships’ journeys shortened with the completion of the Corinth Canal.

On May 9, 2005, the Advanced Spaceborne Thermal Emission and Reflection Radiometer (ASTER) on NASA’s Terra satellite took this picture of the Corinth Canal and the surrounding area. The canal itself appears as a razor-thin blue strip running diagonally through the isthmus. On either side of the canal, straight lines and sharp lines indicate an urbanized environment, dissected by the occasional meandering highway. Corinth is south of the canal, while the port city Loutraki is to the north. Farther away from the canal, both north and south, the terrain turns more rugged and mountainous. Dark green indicates thicker vegetation, compared to the fairly sparse vegetation of the heavily populated areas. Hugging the coastline is a pale strip of blue, likely resulting from very shallow water and perhaps some sediment runoff. The seawater appears fairly pale in general in this image, and that may result from sunglint, where the Sun’s light bounces off the ocean’s surface and directly back into the satellite sensor’s field of view.

Although not built until the late 19th century, the idea of the Corinth Canal appealed to the region’s rulers for more than 2,000 years. Besides inadequate technology, fear of opposing the wishes of the Greek sea god Poseidon was said to play a role in preventing the canal’s construction. The ancient Greeks built an alternative: the “Diolkos”—a limestone-paved path on which a wheeled vehicle ran. The Greeks lifted ships onto the vehicle and pulled them across the path. Navies or merchants with ships too big to take advantage of the Diolkos instead had the cargo unloaded and transported across the land bridge, and then picked up the cargo with a different ship waiting on the other side.

ASTER Zooms In On Suez Canal