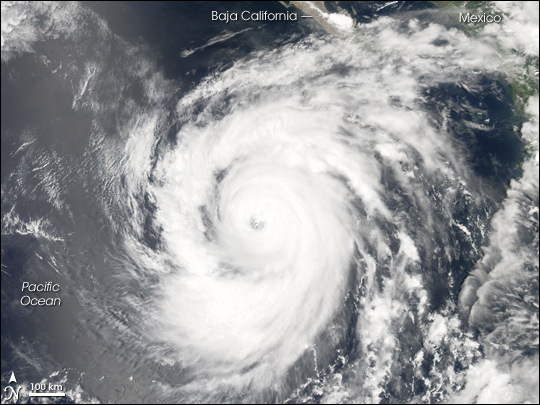 Hurricane Ileana started as all tropical cyclones do, as a depression—an area of low atmospheric pressure. After forming August 21, 2006, the depression quickly developed into a tropical storm, the threshold for earning a name. As happens with some tropical storms, but for reasons not completely well understood to date, Ileana rose all the way to hurricane strength in less than 24 hours.

This photo-like image was acquired by the Moderate Resolution Imaging Spectroradiometer (MODIS) on the Aqua satellite on August 23, 2006, at 2:00 p.m. local time (21:00 UTC). Hurricane Ileana at the time of this image had a well-defined spiral shape and arm structure, with apparent strong thunderstorms (puffy clouds) in regions of the arm structure. The storm also had a well-defined, cloud-filled (or “closed”) eye at its center. At the time of this satellite observation, Hurricane Ileana had sustained winds of around 200 kilometers per hour (120 miles per hour), according to the University of Hawaii’s Tropical Storm Information Center.