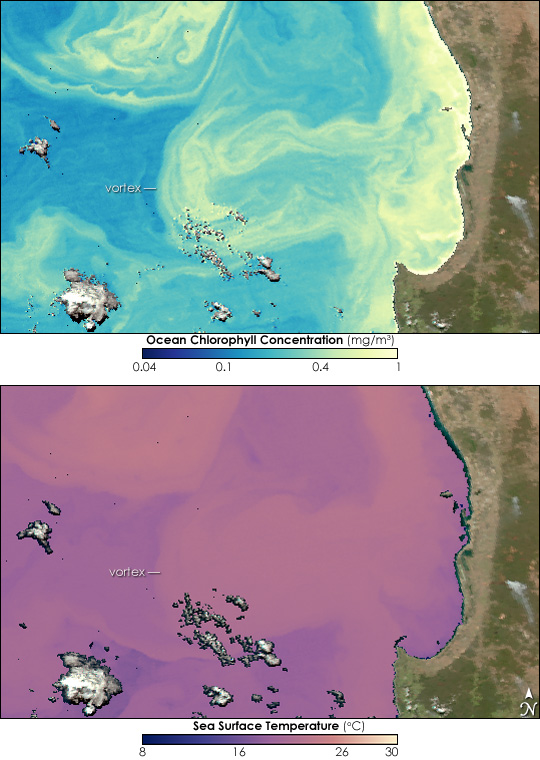 Scientists recently discovered a huge spinning vortex in the Indian Ocean off the coast of Western Australia near Perth. The circling current is sweeping fish larvae and coastal plants out to sea, says Anya Waite, the biological oceanographer from the University of Western Australia who led the team. The Moderate Resolution Imaging Spectroradiometer (MODIS) on NASA’s Aqua satellite detected the vortex on June 5, 2006, by the high concentrations of chlorophyll from coastal plankton (tiny plants) in the water. In the top image, the high chlorophyll concentrations are yellow against an aquamarine background of lower concentrations. The vortex creates a yellow loop around a blue and yellow oval center where chlorophyll concentrations are lower. The vortex measured about 200 kilometers across and 1,000 meters deep, reported the team that discovered it. The circular current was spinning at 5 kilometers per hour (3 miles per hour).

The vortex is an offshoot of the Leeuwin Current, a river of warm water that sweeps south along the coast of Western Australia. The warm current is visible in the lower sea surface temperature image, also taken by MODIS on June 5, as a warm pink streak against the cooler purple of the surrounding ocean. The vortex forms a pink oval. Below the vortex, where water temperatures drop with the change in latitude, the warm current is especially obvious.

In general, loops and eddies in the Leeuwin Current, such as the one that formed the vortex, are common. Like other eddies, the vortex could have a mixed impact on the ecosystem. “Essentially, the eddy could either be a death trap for larval fish, or a nursery for them,” says Waite. “For most finfish larvae, offshore transport away from their adult habitat is probably detrimental. But it’s possible that long-lived rock lobster larvae can benefit from the enhanced offshore productivity in eddies, increasing their survival rate in the open ocean.”

The Leeuwin Current is unlike the currents that run along the west coasts of Southern Africa and South America, the other large land masses at this latitude. In the Atlantic and Pacific Oceans, strong currents from the Southern Ocean carry cold water along the west coasts of Africa and South America. The cold current allows water from the ocean floor to rush to the surface, carrying iron and other nutrients. These nutrients nourish the phytoplankton (ocean plants) that form the base of the marine food chain. As a result, the coastal waters of Chile and southern Africa are productive fisheries, teaming with life. The Leeuwin Current, on the other hand, is warm and keeps denser cool water from welling up. As a result, the waters off Western Australia are relatively poor in nutrients and can’t support the same type of ecosystems as South America and Africa. The warm waters do allow tropical plants and animals to survive much farther south than they might otherwise.