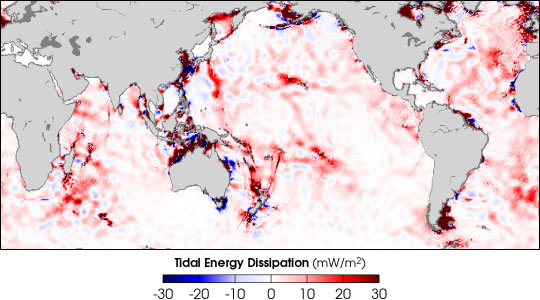 The moon’s gravity imparts tremendous energy to the Earth, raising tides throughout the global oceans. What happens to all this energy? This question has been pondered by scientists for over 200 years, and has consequences ranging from the history of the moon to the mixing of the oceans.

According to their report in the June 15 issue of Nature, about 1 terawatt, or 25 to 30 percent of the total tidal energy dissipation, occurs in the deep ocean. The remainder occurs in shallow seas, such as on the Patagonian Shelf.

“By measuring sea level with the TOPEX/Poseidon satellite altimeter, our knowledge of the tides in the global ocean has been remarkably improved,” said Richard Ray, a geophysicist at Goddard.

The accuracies are now so high that this data can be used to map empirically the tidal energy dissipation. (Red areas, above) The deep-water tidal dissipation occurs generally near rugged bottom topography (seamounts and mid-ocean ridges).

“The observed pattern of deep-ocean dissipation is consistent with topographic scattering of tidal energy into internal motions within the water column, resulting in localized turbulence and mixing”, said Gary Egbert an associate professor at OSU.

One important implication of this finding concerns the possible energy sources needed to maintain the ocean's large-scale “conveyor-belt” circulation and to mix upper ocean heat into the abyssal depths. It is thought that 2 terawatts are required for this process. The winds supply about 1 terawatt, and there has been speculation that the tides, by pumping energy into vertical water motions, supply the remainder. However, all current general circulation models of the oceans ignore the tides. “It is possible that properly accounting for tidally induced ocean mixing may have important implications for long-term climate modeling”, Egbert said.

In the past, most geophysical theories held that the only significant tidal energy sink was bottom friction in shallow seas. Egbert and Ray find that this sink is indeed dominant, but it is not the whole story. There had always been suggestive evidence that tidal energy is also dissipated in the open ocean to create internal waves, but published estimates of this effect varied widely and had met with no general consensus before TOPEX/Poseidon.

TOPEX/Poseidon mission, a joint U.S.-French mission, is managed by the Jet Propulsion Laboratory for NASA’s Office of Earth Science, Washington, DC. The satellite was launched in August 1992, and it continues to produce sea level measurements of the highest quality.

Earth’s Energy out of Balance

These maps show observed and modeled energy imbalances in the top 750 meters of the world’s oceans from 1993-2003.