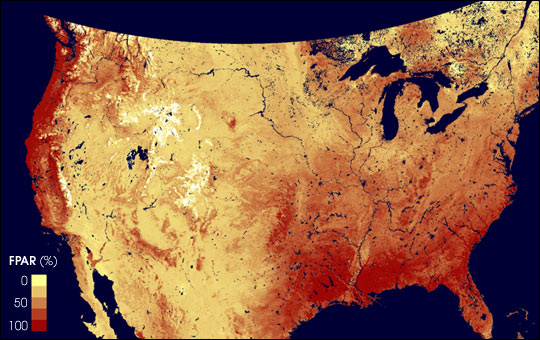 This composite image over the continental United States was produced with data acquired by the Moderate-resolution Imaging Spectroradiometer (MODIS) during the period March 24—April 8, 2000. The image is a map of the fraction of the photosynthetically available radiation that was absorbed by land vegetation for photosynthesis. Notice how closely the high and low values in this image corresponds to yesterday's Leaf Area Index. These are the first two in a series of images over the continental U.S. produced by the MODIS Land Discipline Group (refer to this site on June 5 for the next image in the series).

Today's image is a MODIS data product called "Fraction of Photosynthetically Active Radiation," which is a measure of the proportion of the sunlight actually absorbed by plants versus the total available energy in those wavelengths of sunlight that a vegetation canopy can absorb. In this image, dark red pixels show where land plants are absorbing 100 percent of the photosynthetically available sunlight, pink pixels show where plants are absorbing anywhere from 25 to 75 percent of the sunlight, and tan pixels show zero absorption.

The more leaf area a plant has, the more sunlight it can absorb for photosynthesis. The Fraction of Photosynthetically Active Radiation is one of a new suite of measurements that scientists use to understand how the Earth's land surfaces are changing over time. Their goal is to use these measurements to refine computer models well enough to simulate how the land biosphere influences the natural cycles of water, carbon, and energy throughout the Earth system.

Characteristics of Vegetation in Africa