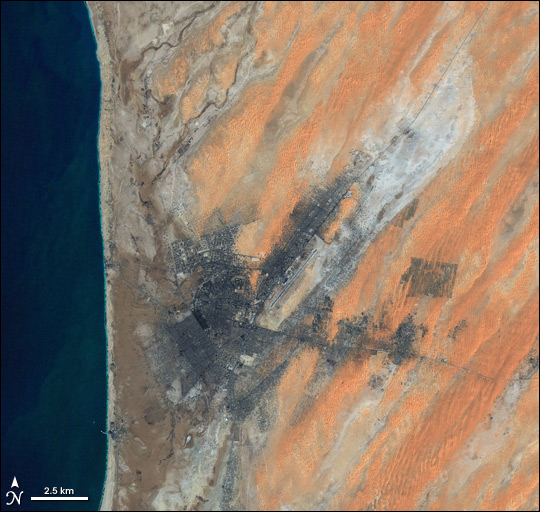 While many worry about urban areas slowly engulfing nearby nature, once in a while the tables are turned. Such is the case in Nouakchott, the capital of Mauritania. This city may be slowly obliterated by nature—not by creeping green vines run amok, but by creeping dunes of sand. Mauritania lies along the west coast of northern Africa, and holds part of the Sahara Desert. Even for the coastal capital, Nouakchott, Saharan sands pose daily challenges for the city’s inhabitants.

The Enhanced Thematic Mapper Plus (ETM+) instrument on NASA’s Landsat satellite captured this photo-like image of Nouakchott on January 9, 2001. In this image, the city of Nouakchott appears in charcoal gray, and its features cover the landscape in a typical grid-like urban pattern. Hot on the city’s heels are sand dunes, appearing as salmon-tinged beige ripples. Although they look appealing in a satellite image, these dunes threaten to overtake the city.

Sand dunes move through a few different means, all of them helped along by wind. One way that dunes can move is through saltation, where sand particles skip along the ground like a rock thrown across a pond might skip across the water’s surface. When these skipping particles land, they may knock into other particles and cause them to skip as well. With slightly stronger winds, particles collide in mid-air, causing sheet flows. In a major dust storm, dunes may move tens of meters through such sheet flows. And like snow, sand avalanches, falling down the steep slopes of the dunes that face away from the winds, also moving the dunes forward.

Sand threatens buildings and crops not only in Africa, but also the Middle East and China. Drenching sand dunes with oil stops their migration, but this approach hurts the environment and uses a finite resource. Sand fences might also work, but researchers are still trying to figure out the best possible fence design. Preventing sand dunes from overwhelming cities and agricultural areas has become a priority for the United Nations Environment Programme.