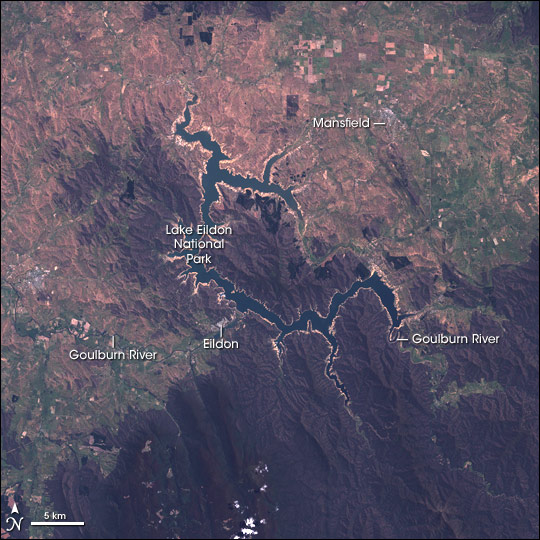 Australia is one of the driest continents on Earth: only Antarctic gets less annual precipitation. It also is the flattest continent, so there are few mountain ranges to wring additional moisture from the atmosphere. It is no coincidence that more than two-thirds of Australia’s population of roughly 20 million people live within a few hours drive of the Great Dividing Range, the largest mountain range in the country. This long ridge of mountains runs roughly parallel to the eastern coast, then hooks around south to parallel the southeastern corner of the mainland. During the early 1950s, many of the largest rivers in Australia, which draw on the rain that falls in the Great Dividing Range, were dammed. The dams provided reliable water, improved irrigation, and hydroelectric power to a growing population. In time, the small Sugarloaf Reservoir that was created in 1914 was vastly expanded to form the current Lake Eildon.

This natural-color Landsat 7 image shows the huge lake, which is more than 50 kilometers (30 miles) long from end to end and holds some five times the water capacity of Sydney Harbour when full (3,500,000 megaliters). It was created in 1950 by expanding the existing dam across the Goulburn River and catching water from several of its significant tributaries. The deep blue lake is surrounded by the Lake Eildon National Park (Fraser National Park on the western side was merged into this park in recent years). South of the lake lies the deep, dark greenery of the eucalyptus-covered hillsides of the Great Dividing Range. Surrounding the lake to the north, the Goulburn River Valley appears as a patchwork of pale green and light pink from irrigated farms. The faint reddish color comes from rich alluvial soil here; some of Australia’s best wineries are located in this valley. Grey splotches mark the location of small cities and towns in the Goulburn Valley such as Mansfield, Eildon, Alexandria, and Marysville.

Lake Eildon appears to have a bright rim around its edges. When the Enhanced Thematic Mapper Plus (ETM+) instrument on Landsat 7 acquired this image on November 28, 1999, the area was at the end of the spring growing season, when the public’s use of water from the lake often peaks. This was also roughly one year into a drought cycle that was to last several years, lowering water levels in Lake Eildon and neighboring water storage areas quite significantly. As of October 2005, Lake Eildon was at roughly 45 percent of its capacity.