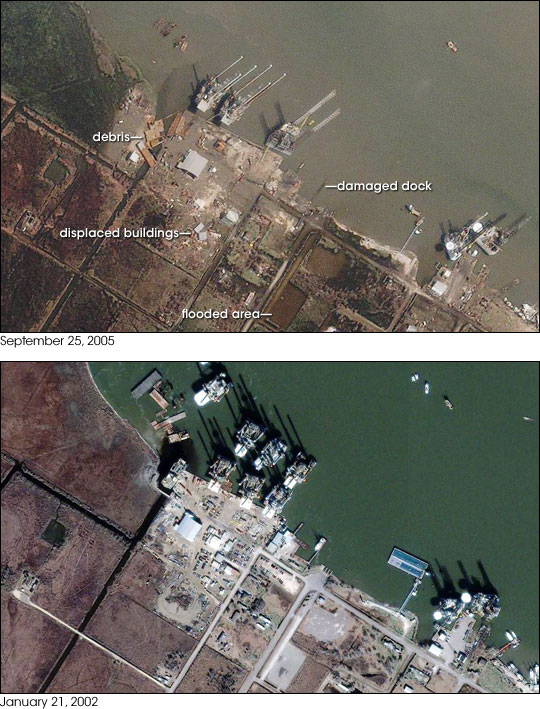 Hurricane Rita came ashore directly over Sabine Pass, Texas on September 24, 2005. This small community sits on the Texas side of Sabine Lake near the Gulf shoreline. The Category 3 storm battered the town with a 15-foot storm surge, high winds, and heavy rain as it moved inland. The effects of such treatment are clear in the top image, taken by the Ikonos satellite on September 25, 2005. The entire image is a mud-colored brown, a sign that silt-laden flood water probably washed over the region. Sabine Lake is still brown with run-off. Under normal conditions, shown in the lower image, the lake is a clear green. The top image shows other signs of Rita’s recent visit. Debris is scattered throughout the scene, particularly in the small canal on the left side of the image, and at least two buildings have been pushed away from the shore.

One of the major industries in Sabine Pass is marine repair and construction in support of the offshore oil and gas industry. The structures seen here are probably production platforms. Though the structures appear undamaged, it is difficult to compare them to similar structures being constructed in January 2002 because of the view angle. When Ikonos captured the lower image on January 21, 2002, it was nearly directly over the area. Only the long shadows cast on the surface of the lake reveal the three tall towers on each structure. On September 25, the satellite viewed the scene from an angle, a change in perspective that makes the construction of the platforms easier to see.

Much of the southwestern and central Louisiana shoreline was under water after Hurricane Rita passed on September 24, 2005.