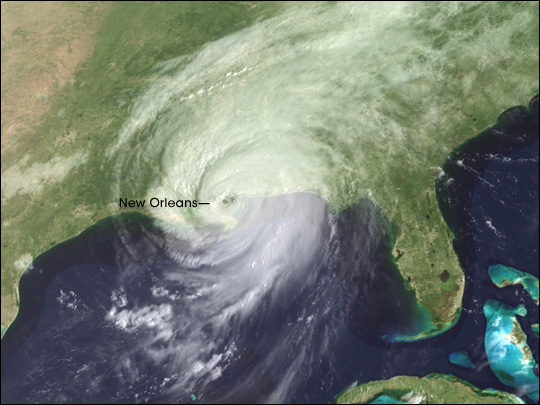 Hurricane Katrina moved ashore over southeast Louisiana and southern Mississippi early on August 29, 2005, as an extremely dangerous Category 4 storm. With winds of 135 miles per hour (217 kilometers per hour), a powerful storm surge, and heavy rains, Katrina pounded the U.S. Gulf Coast, triggering extensive life-threatening flooding. This GOES image shows the storm as it moved over southern Mississippi at 9:02 a.m. The eye of the storm was due east of New Orleans, Louisiana. Katrina moved north into Mississippi, and was expected to track quickly northeast across the United States into Eastern Canada over the first part of the week.

The first image in the animation was taken at 7:15 p.m. CDT on August 28. At this time, Katrina was well-organized, with a large eye. The storm had winds of 160 mph (258 km/hr) with stronger gusts and a central pressure of 902 millibars. The lower the air pressure associated with a hurricane, the more powerful the storm tends to be. Since records began, only three storms have ever had lower air pressures. Katrina was a very powerful and extremely dangerous Category 5 storm.

As the storm moved north through the night, it weakened slightly into a Category 4 storm before slamming ashore over southeastern Louisiana around 6 a.m. As the storm moved ashore during the day, it gradually lost its distinctive eye and weakened to the Category 1 storm seen in the final frame, taken at 2:45 p.m. on August 29.