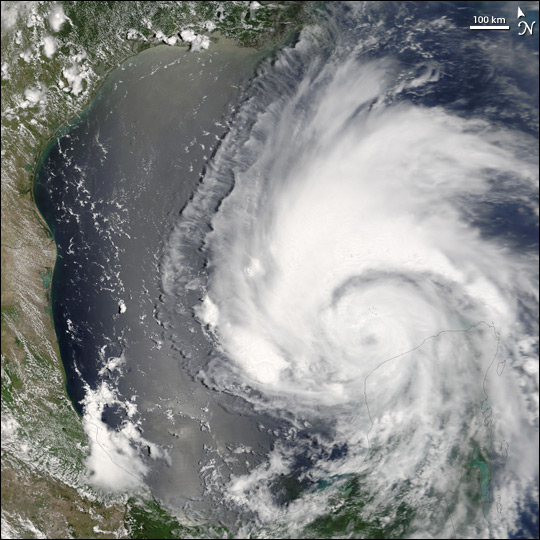 Despite its encounter with land, Hurricane Emily retained the characteristic swirling form of a hurricane when it emerged over the Gulf of Mexico on July 18, 2005. The Moderate Resolution Imaging Spectroradiometer (MODIS) on NASA’s Terra satellite captured this image at 12:10 p.m. local time in Cancun, Mexico, just after Emily returned to open waters. At this time, the storm was a Category 1 storm with winds of 120 kilometers per hour (75 miles per hour).

The National Hurricane Center predicts that Emily will regain strength over the warm waters of the Gulf of Mexico, possibly becoming a Category 3 storm before going ashore near the Mexico-U.S. border on July 19.

Emily is a record-setting storm for many reasons. When it formed on July 11, Emily became the earliest fifth named storm on record. As it moved through the Caribbean, Emily intensified into a powerful Category 4 storm with winds over 250 km/hr (150 mph) and gusts as high as 300 km/hr (184 mph), making it the most powerful storm to form before August. The previous record was set by Hurricane Dennis, which ripped through the Caribbean during the first week of July 2005. Emily’s Category 4 status also made 2005 the only year to produce two Category 4 storms before the end of July.