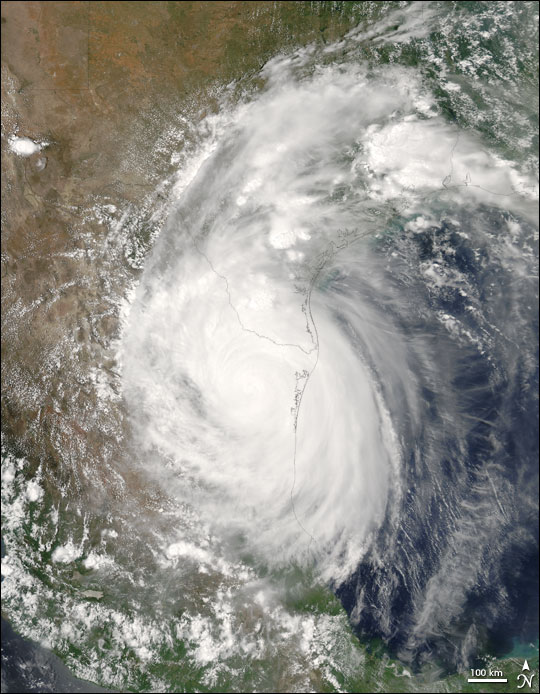 Hurricane Emily had come ashore in Mexico on July 20, 2005, when the Moderate Resolution Imaging Spectroradiometer (MODIS) on NASA’s Aqua satellite captured this image. The image shows the storm at 3:05 p.m. local time, roughly one day after Emily made landfall. The storm is bringing much needed rain into the parched Rio Grande drainage basin, though the arrival of this water as a deluge poses dangers and challenges even as it refills low water reservoirs slightly.

Emily is a record-setting storm for many reasons. When it formed on July 11, Emily became the earliest fifth named storm on record. As it moved through the Caribbean, Emily intensified into a powerful Category 4 storm with winds over 250 km/hr (150 mph) and gusts as high as 300 km/hr (184 mph), making it the most powerful storm to form before August. The previous record was set by Hurricane Dennis, which ripped through the Caribbean during the first week of July 2005. Emily’s Category 4 status also made 2005 the only year to produce two Category 4 storms before the end of July.

Emily is responsible for five deaths through the Caribbean, as well as considerable damage in places as far apart as the Lesser Antilles Islands and Jamaica to Mexico’s Yucatan Peninsula. Tornadoes spawned by Emily have also caused some damage in southern Texas.