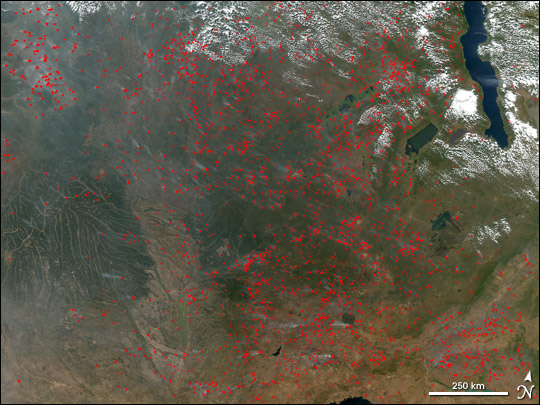 Each year, thousands of fires burn across southern Africa beginning in May and ending in late August or early September. Between February and March, rainfall begins to shift from the savannas of southern Africa to areas north of the tropical forests in the continent’s interior. By May, agricultural fires are usually widespread across southern Africa savannas, but are months away from reaching their peak, which usually occurs in late August or early September. These are agricultural fires that people use to clear and renew pasture or farmland. While they are not necessarily immediately hazardous, such fires can have a strong impact on weather, climate, human health, and natural resources.

This image of Africa captured by the Moderate Resolution Imaging Spectroradiometer (MODIS) on NASA’s Aqua satellite on May 31, 2005, shows the location of hundreds of fires marked in red across Democratic Republic of Congo (which takes up much of the center of the image), Angola (lower left quadrant), and Zambia (lower right quadrant). In the upper right corner of the image is Lake Tanganyika, which marks the border between Democratic Republic of Congo and Tanzania to the east. Other eye-catching features in the scene are the river-traced Angola Plateau (center left edge), and the Muchinga Escarpment, which cuts diagonally across the lower right corner of the image. The terrain on the southeastern side of the escarpment appears more arid, at least in this season, than the landscape to the northwest.