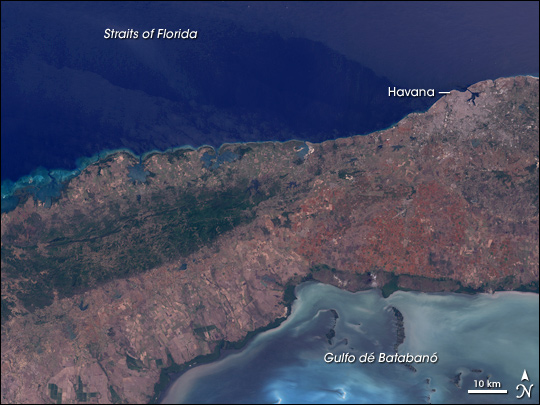 Cuba is the largest of the Caribbean islands, with a long, complex coastline and considerable chains of offshore islands. Coral reefs stretch along virtually the entire border of the Cuban shelf. The majority of these reefs lie offshore in long tracts which resemble barrier reefs, separated from the main island by broad lagoons. The longest runs for some 400 kilometers along the north coast from the Archipiélago de Sabana to the Archipiélago de Camaguey. On the south coast a similar reef tract stretches for over 350 kilometers from Trinidad to Cabo Cruz.

This Landsat 7 image captures the western end of Cuba, showing both southern and northern reef communities in this natural-color image. Unlike true barrier reefs, the lagoons behind these reef tracts are very shallow. Hurricanes are more frequent in the south and west where the reef communities are dominated by species resistant to sedimentation and water movement, especially in the Gulf of Batabanó. The Enhanced Thematic Mapper Plus (ETM+) instrument acquired this view of the island on April 3, 2001.

In this view, Landsat’s ETM+ sensor is seeing throught the clear, shallow water off the southern coast of Cuba down to the sandy bottom below. Swirls of soft color show where currents are dragging the fine white sands of the ocean bottom through the strait. The north side of the island is dramatically different. Shallow lagoons cluster along the coastline, but the ocean quickly turns the dark blue of deeper water. In the gap between the south end of Florida (out of image at upper left) and Cuba, warm water from the Gulf of Mexico gushes through the narrow but deep slot to form the Gulf Stream, a strong current of warm water which parallels the United States East Coast and crosses the northern Atlantic to bring warmth to Europe.

Other features obvious in this image include the rugged forested green of mountains. In the northeast of this image, the grey-brown smudge along the coastline is Cuba’s capital and largest city, Havana.