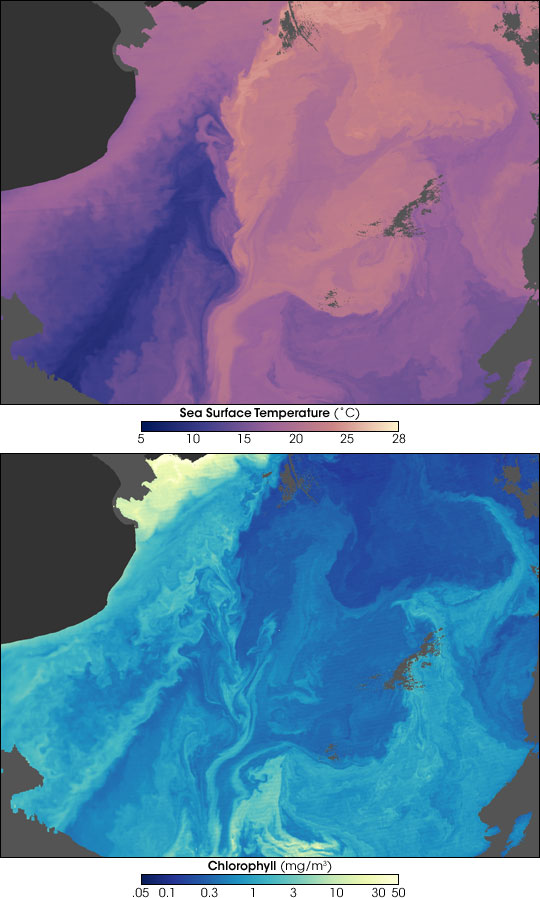 The dark blue icy finger of the Malvinas Current reaches north into the warm tub of South Atlantic Ocean in this sea surface temperature image. The current is an offshoot of the Circumpolar Current, the band of ocean water that circles Antarctica, and it carries frigid water north along the coast of South America until it encounters water pouring out of the Rio de la Plata between Argentina and Uruguay. Here, the cold Antarctic waters also meet the Brazil current carrying warm subtropical waters south, and the 20-degree boundary between the two currents forms a stark line in the top image. The image, and the chlorophyll concentration image that accompanies it, was acquired on May 2, 2005, by NASA’s Moderate Resolution Imaging Spectroradiometer (MODIS).

The lower image reveals the correlation between sea surface temperature and plant life. The cold, deep current stirs nutrients from the ocean depths and brings them to the surface, where plants thrive on them. By contrast, the warm current is shallow, and so the waters tend to be nutrient poor. The effect of the two currents on plant life is starkly clear where the two meet near the Rio de la Plata. In the lower image, which shows chlorophyll concentrations, the Malvinas Current is rich with plant life. The pattern of warm pink formed by the Brazil current in the top image matches the lifeless dark blue bulge where few plants are growing in the center of the lower image.

Nutrient-rich waters such as those fed by the Malvinas Current also tend to support a diverse ecosystem. The tiny plants that grow on the surface of the ocean feed other ocean life. Off the coast of South America, fish teem in the waters of the Malvinas Current, and commercial fishing is an important industry in Argentina and Uruguay.