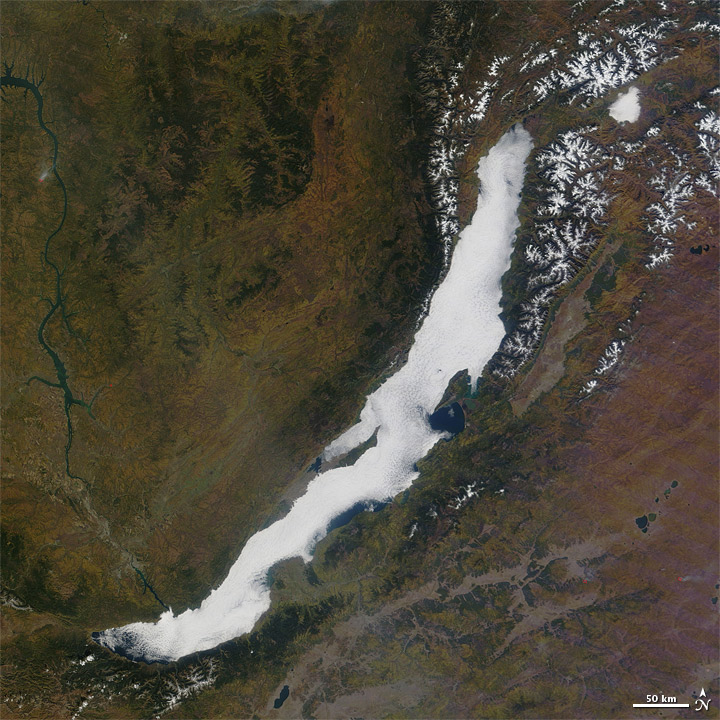 Fog is essentially a cloud that exists near the Earth’s surface, and fog can form over land or water. On September 22, 2011, fog formed over Lake Baikal in southeastern Siberia, and the Moderate Resolution Imaging Spectroradiometer (MODIS) on NASA’s Aqua satellite captured this natural-color image the same day.

The fog almost perfectly mimics the lake’s area, only thinning at the southwestern end, and leaving a few parts of the water surface fog-free. When cold air flows over warm water, some surface water evaporates into the cold air and saturates it, raising its relative humidity to 100 percent. The phenomenon is alternately known as evaporation fog, steam fog, even sea smoke, explains Michael Pidwirny of the University of British Columbia. Meteorologists define the existence of fog as visibility of less than 1 kilometer (0.6 miles) at ground level.

Lake Baikal is 25 million years old and about 1,700 meters (5,600 feet) deep, making it the world’s oldest and deepest lake. It holds about 20 percent of Earth’s unfrozen fresh water, according to the United Nations Educational, Scientific and Cultural Organization (UNESCO). The lake is a UNESCO World Heritage Site.