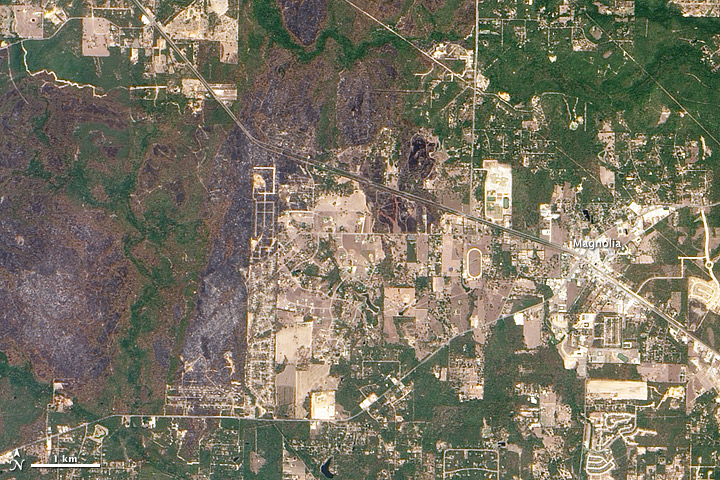 Ten days after the fire started, firefighters completely contained the Riley Road fire northeast of Houston, Texas. By September 14, 2011, the fire had burned 18,960 acres, destroyed 76 structures, and damaged 23 others. This image, taken by the Advanced Land Imager (ALI) on NASA’s Earth Observing-1 (EO-1) satellite on September 15, illustrates how successful firefighters were at preventing additional damage.

Dark brown and gray charred land surrounds residential areas on two sides east of the town of Magnolia. The dark, freshly burned land includes geometric tan shapes—roads—revealing areas where structures were likely damaged. For the most part, however, the burned area is confined to the forest beyond the town. The Texas Forest Service reported that the fire burned primarily in mixed hardwood forest. The large image, which includes a wider area, shows the full extent of the Riley Road Fire.

Riley Road fire was one of 131 fires burning in Texas over the past week. The most damaging was the Bastrop County Complex, which burned at least 1,554 homes and 34,068 acres east of Austin. Nearly all of Texas is living with exceptional or extreme drought, making it prone to fire.

Charred land shows the extent of the Riley Road fire near Magnolia, Texas, in this image taken on September 15.