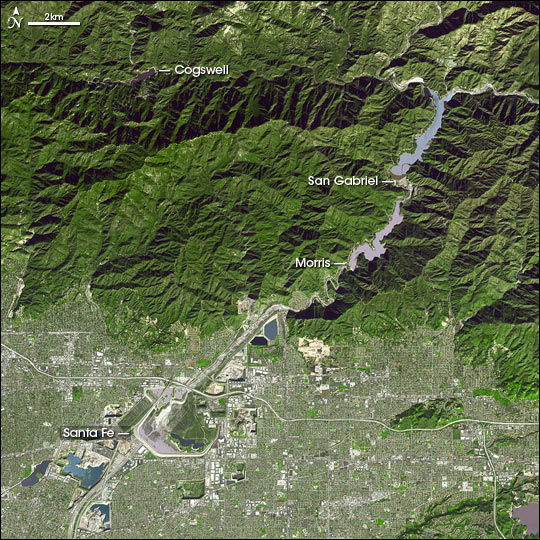 In the mountains north of Los Angeles, California, three intermittent steams come together to create the San Gabriel River, which flows southwest out of the mountains. The river is subject to torrential floods, and has an extensive water control system in place, with numerous dams, levees, and reservoirs. The major rainstorms that hit Southern California around New Year’s Day 2005 put that system to the test, filling local reservoirs to capacity.

This image shows four major dams along the course of the San Gabriel: the Cogswell Dam, on the West Fork; the large San Gabriel Dam, which creates the largest reservoir; the Morris dam, to the south of the San Gabriel; and the Santa Fe, which creates a large water overflow basin. Past the Santa Fe Dam, the river flows into the suburban and urban landscapes of Los Angeles, after passing by a final large dam, the Whittier Narrows Dam (not pictured). The water management system allows engineers to capture water that runs quickly off the impervious surfaces of the rugged mountains and let it percolate slowly down into the underground aquifer at the foot of the mountains.

In the image, vegetation appears green, the suburbs appear like a green-and-gray tweed, and water is in various shades of blue and purple, depending on the level of sediment. The thick white lines are major highways. The San Gabriel Mountains tower over the suburbs of Los Angeles, with several summits over 9,000 feet in elevation. The range’s tallest peak is Mount San Antonio (also called Mount Baldy), which is 10,064 feet. The mountains end in the north at the Mojave Desert (not pictured).

This image, captured by NASA’s Advanced Spaceborne Thermal Emission and Reflection Radiometer, on January 23, 2005, covers an area of 39.5 by 45.4 kilometers, and it is located near 34.1 degrees North latitude, 117.9 degrees West longitude.