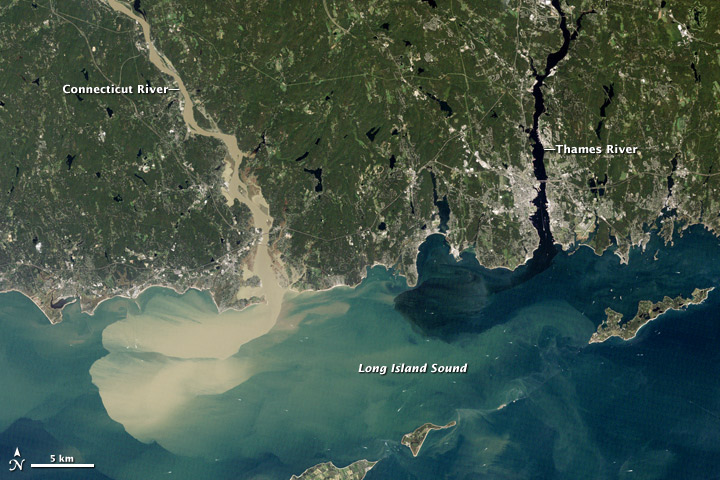 Nearly a week after Hurricane Irene drenched New England with rainfall in late August 2011, the Connecticut River was spewing muddy sediment into Long Island Sound and wrecking the region's farmland just before harvest. The Thematic Mapper on the Landsat 5 satellite acquired this true-color satellite image on September 2, 2011.

With its headwaters near the Canadian border, the Connecticut River drains nearly 11,000 square miles (28,500 square kilometers) and receives water from at least 33 tributaries in Vermont, New Hampshire, Massachusetts, and Connecticut. The 410-mile river—New England's longest—enters Long Island Sound near Old Lyme, Connecticut, and is estimated to provide 70 percent of the fresh water entering the Sound.

When Irene blew through the region on August 27-28, substantial portions of the Connecticut River watershed received more than 6 to 8 inches (15-20 centimeters) of rainfall, and several locations received more than 10 inches (25 centimeters). Whole towns were cut off from overland transportation—particularly upstream in Vermont, which suffered its worst flooding in 80 years. Thousands of people saw their homes flooded, if not washed off their foundations, at a time of year when rivers are usually at their lowest.

Preliminary estimates of river flow at Thompsonville, Connecticut, (not shown in this image) reached 128,000 cubic feet per second (cfs) on August 30, nearly 64 times the usual flow (2,000 cfs) for early fall and the highest flow rate since May 1984. At the mouth of the river—where flow is tidal, and therefore not gauged—the peak water height reached 6.9 feet (2.1 meters) above sea level, almost a foot higher than at any time in the past 10 years.

According to Suzanne O'Connell, a geologist from Wesleyan University, the torrent of water coursing through the Connecticut River basin runs over a landscape that was once submerged under Glacial Lake Hitchcock. As it runs down from the highlands and coastal plains to Long Island Sound, the river can pick up fine sediment "that is so perfect for farming or for adding suspended sediment to a river." In the wake of Irene, the turbidity (muddiness) of the water, as measured at Essex, Connecticut, was 50 times higher than before the storm.

To the east, the Thames River appears to be carrying very little sediment at all on September 2. According to O'Connell, the Thames "drains glaciated terrain, so fine sediment was removed long ago." Most of the land surface in the Thames basin is "just bedrock, till, and glacial erratics." Unlike the Connecticut, areas within the Thames watershed only received 2 to 4 inches of rain in most locations.

The flooding that occurred in the aftermath of Hurricane Irene inundated farmland in Massachusetts and Connecticut just before harvest time, the Associated Press noted. Crops were drowned under inches to feet of water. The substantial amounts of soil, sediment, and water deposited on land during the flood could also pose trouble for farmers in coming seasons.