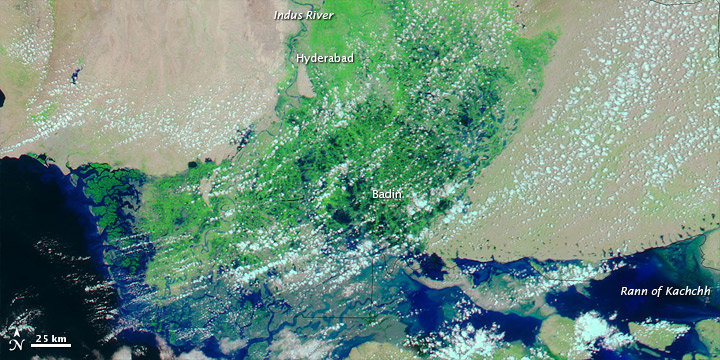 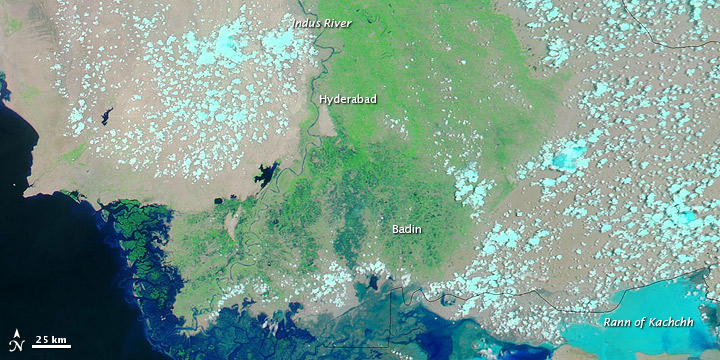 On August 18, 2011, The Express Tribune reported that the city of Badin in Pakistan’s Sindh Province had disappeared under 5 feet (1.5 meters) of flood water. Three days of rain and breaches of the Left Bank Outfall Drain inundated millions of acres of crops, the paper stated.

The Moderate Resolution Imaging Spectroradiometer (MODIS) on NASA’s Aqua satellite captured these images on August 18, 2011 (top), and July 17, 2011 (bottom). The images show the Pakistan coast near the border with India, and both scenes use a combination of visible and infrared light to better distinguish between water and land. Water ranges from electric blue to navy. Vegetation is green. Bare ground is pink-beige. Clouds are pale blue-green.

Because Pakistan receives most of its rainfall between July and September, some of the differences between these images are typical seasonal changes. The Rann of Kachchh (or Kutch) near the Pakistan-India border, for instance, transforms from salt desert to salt marsh annually. Nevertheless, the large swaths of standing water around Badin in August are unusual.

According to The Express Tribune, the drain breach flooded fields of cotton, rice, tomatoes, onions, and chilies that were ready to harvest. Local farmers had anticipated a bumper cotton crop, which is now lost. Because many farmers use the income from one harvest to invest in the next crop (wheat), the flooding could hamper that crop as well. 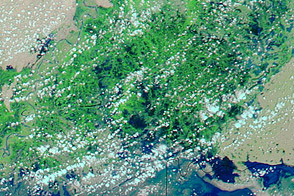